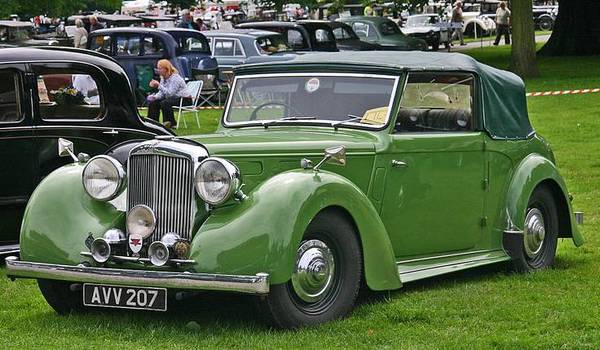 A Alvis TA14 from Carbodies of Coventry

Carbodies Limited is a British company, based at Holyhead Road, Coventry. It started business as a coachbuilder, and now, as The London Taxi Company is best known for its production of London taxicabs.

The business began in 1919, when Robert 'Bobby' Jones, a former general manager at coachbuilder Hollick and Pratt took over the coachbuilding operations of his then employer, timber merchants Gooderhams and set up in business in premises acquired from Thomas Pass in West Orchard, Coventry.

Rather than make bespoke bodies to individual designs, Carbodies set out to produce coachwork to a number of standardised designs for car companies that did not have their own coachbuilding facilities. Their first major customers during the 1920s were MG and Alvis Cars. The scale of a new contract to build bodies for the MG M-Type Midget meant that they needed larger premises and in 1928, they moved to a larger site on Holyhead Road, where they remain to this day. In the 1930s, they supplied bodies for Rover, Invicta and Railton, but by far their biggest and most important customer in that decade was the Rootes Group.

During World War II the company made bodies for military vehicles. They also acquired press tools through the Lend-Lease scheme, which enabled them to make aircraft components. Carbodies also became a limited company at this time, with Bobby Jones as governing director and his son, Ernest Jones managing director.

After the war Carbodies negotiated with London taxi dealer Mann & Overton and Austin to make bodies for the Austin FX3 taxi as well as finishing and delivering the complete vehicles. They also developed a system for turning modern all-steel saloon cars into convertibles. This work was carried out on the early unit construction Hillman Minx, the Austin Somerset and Hereford, the Ford Mk1 Consul and Zephyr and, later the Mk2 Ford Consul, Zephyr and Zodiac.

In 1954, Bobby Jones sold Carbodies to the BSA group, who put it under the control of their prestige car company, Daimler. Although it was intended for Carbodies to become the manufacturing plant for Daimler steel bodies, this was never fulfilled. They did, however convert the Conquest saloon into a drophead, using the same methods they used on Fords and Austin and also made a drophead coupe body for the Daimler Conquest Roadster and made bodies for the Daimler Majestic and Majestic Major saloons.

Under BSA, manufacturing facilities were extended and more plant installed. In 1958, Carbodies began manufacturing the body and carrying out the assembly, finishing and delivery of the most important vehicle in their history, the Austin FX4 taxi. Carbodies also supplied prototype bodies and tooling, projects including the Jaguar E-type bonnet and panels for Triumph, Ariel and BSA motorcycles and scooters.

Further contracts undertaken during the 1960s and early 1970s were the conversion of Humber Hawk and Super Snipe, Singer Vogue and Triumph 2000 saloons into estate cars, but gradually, as contract work on private cars and commercial vehicles fell away, the FX4 taxi would become more important for the company.

In 1971 Carbodies bought the FX4 chassis assembly line from British Leyland's Adderley Park, Birmingham factory and moved it to Coventry, making them complete manufacturers of the FX4, in actuality if not in name.Two years later, Carbodies was bought, along with parent company BSA by Manganese Bronze Holdings.

In the 1970s, Carbodies tried to make a new taxi of their own, the FX5, but it was abandoned in 1979 because the development costs were too high. 1982 saw Carbodies take responsibility for the complete manufacture of the FX4 taxicab, when British Leyland had finally lost interest in it. By this time, the FX4 was the company's only product, despite attempts to introduce new lines, such as a Ford Cortina MkV convertible and the Range Rover Unitruck. A new model of taxi, the CR6, based on a Range Rover bodyshell was abandoned after almost five years of development.

In 1997, a new model of taxicab, the TX1 was introduced. This was updated as the TXII in 2002, and in 2007 as the present model, the TX4. This series has established LTI Vehicles as a worldwide supplier of London-type taxis.

Carbodies of Coventry
Updated
Saturday, 04 May 2019
Edited By
MCH