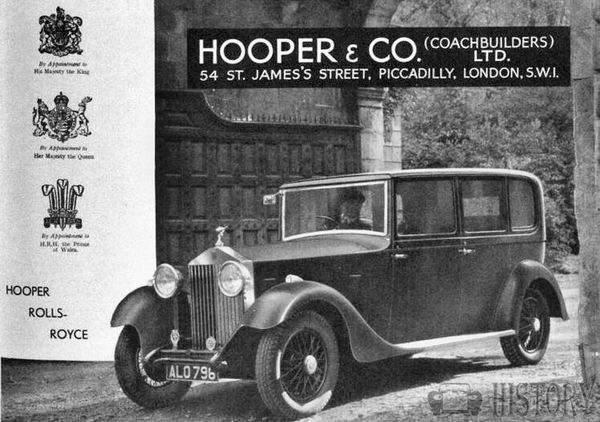 Hooper & Co. was a British coachbuilding company based in Westminster London. From 1805 to 1959 it was a notably successful maker, to special order, of luxury carriages both horse-drawn and motor-powered.

The company was founded as Adams and Hooper in 1805 and held a royal warrant from 1830, building elegant horse-drawn carriages, supplying them to King William IV, Queen Victoria and King Edward VII. They moved into motor bodies at the turn of the 20th century. The first royal car, a Hooper body on a Daimler chassis, was delivered to Sandringham on 28 March 1900. It was painted chocolate brown with red lines; a livery which continued for the royal family well into the twentieth century.

Hooper specialized in the very top tier of the market, building the most luxurious bodies possible without consideration of cost. The models were not sporty, as the company specialized in stately, elegant carriages. Coach customers included the Marquis of Londonderry and the Marquis of Crewe . Car body customers included the Kings of Spain, Norway, Portugal and Siam, the Shah of Persia and the Negus of Abyssinia. In 1911, Hooper built an extension onto their Kings Road works, due to increased customer demand. Their London showroom, opened 1896 (possibly earlier), was on the corner of St James' Street and Bennet Street. It included a vehicle lift so that coaches and cars could be displayed at first floor. The alterations are likely to have been overseen by Francis Hooper, architect, son of the then owner.

In 1938 Hooper acquired rivals Barker who were in receivership. Barker retained its separate identity.

Hooper was acquired by The Daimler Company in 1940, becoming part of the BSA industrial group.

Post war, Hooper became famous for making a series of outrageously-bodied large Daimlers for Lady Docker, the wife of the BSA chairman. This season's extravagant new Docker Daimler was exhibited each October at the London Motor Show.

As the era of building cars on separate chassis was ending, and with it the market for complete bodies, Hooper completed the transition from wood-framed bodywork to bodies built over a skeleton of cast or extruded aluminium. Cast alloy was first used about 1933 in door and windscreen pillars where the 'fight' between roof and scuttle structures tended to cause cracking. 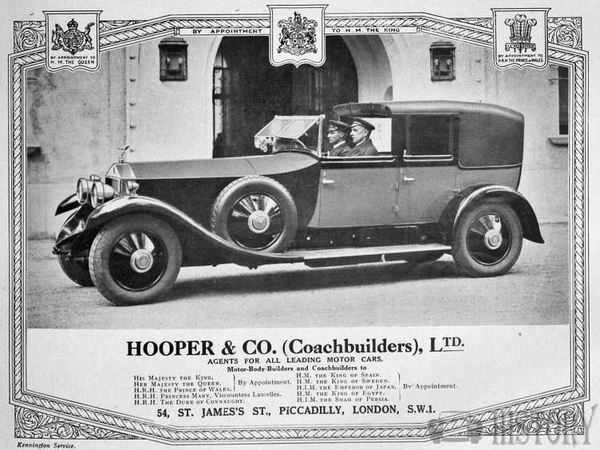