Mobil Oil Advertising from the 1950s 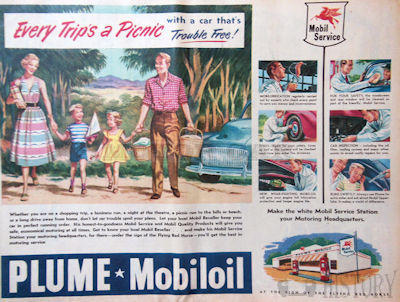 Through the years, Mobil was among the largest sellers of gasoline and motor oils in the United States and even held the top spot during the 1940s and much of the 1950s. Various Mobil products during the Socony-Vacuum and Socony-Mobil years included Metro, Mobilgas and Mobilgas Special gasolines; Mobilfuel Diesel, MobilHeat and Mobil-flame heating oil, Mobil Kerosine, Lubrite,Gargoyle, Mobiloil and Mobiloil Special motor oils; Mobilgrease, Mobillubrication, Mobil Upperlube, Mobil Freezone and Permazone antifreezes, Mobilfluid automatic transmission fluid, Mobil Premiere tires, Mobil Stop-Leak, and Mobil Lustrecloth, among many others.

In 1954, Mobil introduced a new and improved Mobilgas Special in response to trends toward new automobiles powered by high-compression engines that demanded higher and higher octane gasolines. The newest formulas of Mobilgas Special were advertised as offering "A Tune-Up in Every Tankful" due to a combination of chemicals known as the "Mobil Power Compound" which was designed to increase power, check pre-ignition ping, correct spark plug misfiring, control stalling and combat gumming up of carburetors. Later Mobil campaigns advertised Mobilgas as the "New Car Gasoline" following extensive testing during the annual Mobilgas Economy Run.

The Mobil Guide was an annual book of hotel and restaurant recommendations based on a system developed by Mobil in 1958. It rated businesses from one to five stars according to their assessed quality. In October 2009, ExxonMobil licensed the brand to Forbes magazine, which retitled the guide's various designations, e.g., Forbes Travel Guide, Forbes Five Stars, and so on. Forbes launched revised versions of various guides in late 2009.

Mobil opened its first UK service stations in the early 1950s, after the wartime POOL monopoly was disbanded. Mobil grew to become the seventh largest brand of petrol in Britain, supplying 1,990 outlets in 1965.

In Australia 1954 the Plume brand was replaced by Mobilgas.