Although the Dolomite proved to be refined and rapid, competitors such as the BMW 2002 had a performance advantage which was costing Triumph dearly, both in terms of sales and prestige. To remedy this, Triumph unveiled the Dolomite Sprint in June 1973, although the launch had been delayed by a year; it had been due to go on sale in 1972.

A team of engineers led by Spen King developed a 16-valve cylinder head with all of the valves being actuated using a single camshaft rather than the more conventional DOHC arrangement. The capacity was also increased to 1,998 cc (122 cu in), and combined with bigger carburettors the output was upped to 127 bhp (95 kW). This represented a significant increase over the smaller 1850cc variant, however it fell short of the original target of 135 bhp (101 kW). 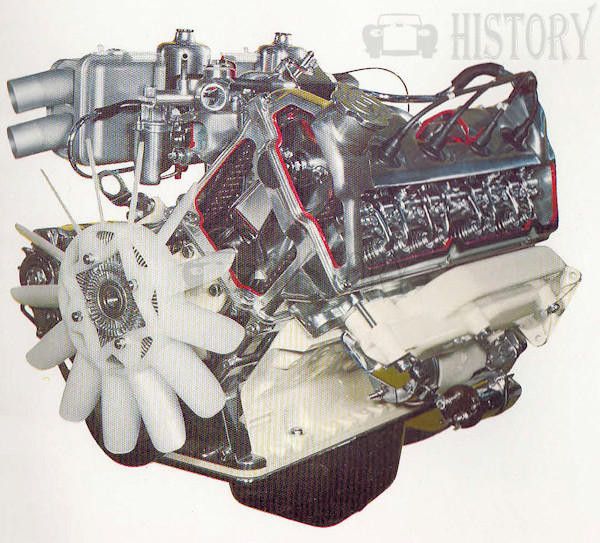 Despite BL engineers being able to extract a reliable 150 bhp (112 kW) from test engines, the production line was unable to build the engines to the same level of quality, with production outputs being in the region of 125 bhp (93 kW) to 130 bhp (97 kW). This led to the original model designation, the Dolomite 135, being replaced at short notice with the Sprint name.

As a result of this new engine, the Dolomite Sprint has a claim to be the world's first "truly mass-produced" multi-valve car. While other multi-valve engines (notably the Lotus 907) were produced in volume, they were not used in mass production vehicles until after the introduction of the Dolomite Sprint. The design of the cylinder head won a British Design Council award in 1974. Performance was excellent, with 0–60 mph taking around 8.4 seconds, with a maximum speed of 119 mph (192 km/h). Trim was similar to the 1850, with the addition of standard alloy wheels (another first for a British production car), a vinyl roof, front spoiler, twin exhausts and lowered suspension. By now seats were cloth on the 1850, and these were also fitted to the Sprint.

Due to the increase in power brought by the new engine, the rest of the driveline was upgraded to be able to withstand the extra torque. The gearbox and differential were replaced by a version of those fitted to the TR and 2000 series cars, albeit with a close ratio gearset in the gearbox. The brakes were upgraded, with new pad materials at the front, and the fitment of larger drums and a load sensing valve at the rear. Other changes over the standard Dolomite included the option of a limited slip differential. The optional overdrive and automatic transmission from the 1850 model were also offered as options on the Sprint. Initial models were only offered in Mimosa Yellow, although further colours were available from 1974 on.

At launch the Sprint was priced at £1740, which compared extremely well to similar cars from other manufacturers. Prospective buyers would have been hard pressed to justify the extra £1000 cost of the BMW 2002 Tii, which offered similar performance. The four-door practicality of the Sprint also made it a very attractive proposition for the young executive choosing his first company car. The press gave the Dolomite Sprint an enthusiastic reception. Motor summarised its road test (subtitled "Britain leads the way") with glowing praise:

...the Sprint must be the answer to many people's prayer. It is well appointed, compact, yet deceptively roomy. Performance is there in plenty, yet economy is good and the model's manners quite impeccable ... Most important of all, it is a tremendously satisfying car to drive.

In the first series of The Professionals Bodie drove a white Dolomite Sprint.

As with many other British Leyland cars of the period, a number of "Special Tuning" options were available for the Dolomite Sprint, offering dealer fitted upgrades to the car that included larger carburettors, freer flowing exhaust systems, and competition camshafts. These upgrades were designed by the factory race team and offered in order to homologate the tuning parts for competition purposes.

In 1977, a number (probably 62) of Triumph TR7s with the same Sprint engine were manufactured as pre-production cars at Speke, Liverpool However, this TR7 Sprint variant was cancelled with the closure of the Speke assembly plant in 1978.

The Dolomite Sprint was campaigned in the British Touring Car Championship from 1974 to 1978. It met with some success, with Andy Rouse winning the Drivers' Championship in 1975, and also lifting the manufacturer's title in 1974 with team mate Tony Dron.

The Sprint driven by Andy Rouse and Tony Dron managed fifth overall in the Spa 24 hours race in July 1974. In September Dron managed 3rd place overall in a Sprint competing in the RAC Tourist Trophy race of that year. In 1975 Andy Rouse won the British Touring Car Championship outright by taking the driver's title in a Sprint. In 1976 Broadspeed only ran one Dolomite Sprint in British Saloon Car Championship, with Rouse finishing second in the two litre class. 1977 saw the departure of Rouse and the return of Tony Dron as driver of the Broadspeed prepared Dolomite Sprint. Dron managed to win no less than seven of the twelve races outright against some stiff competition, and narrowly missed out on winning the championship outright because of tyre failure on the final race when leading his class by over a minute. In 1978 Broadspeed entered a sole Dolomite Sprint (driven by Tony Dron) where it won only one race outright, although the Sprint still won class B in the last year a factory entered Sprint would compete in the British Saloon Car Championship.

Due to the heavier bodyshell and somewhat fragile engine, the Dolomite Sprint was less successful in rallying. Retirements were rather frequent resulting in failure to complete any rallies during 1974.

Things improved slightly in 1975 when a Sprint crewed by Brian Culcheth and Johnstone Syer finished 11th overall in the Welsh Rally in May 1975 (FRW 812L). This was quickly followed up with an impressive second place overall in the Tour of Britain in August 1975, and in the 1975 Lombard RAC Rally Culcheth and Syer won Group 1 and were first in class.

From May 1976 onwards, the Dolomite Sprint would run alongside the TR7 before being eventually withdrawn from rallying, the TR7 V8 taking over the mantle. In the Lombard RAC Rally of 1976, the Sprint was forced to retire with engine problems. 1977 would be the last season where factory entered Sprints would compete in any form of rallying. Ryan and Nicholson managed to win Group 1 while coming eighth overall in the Granite City Rally, and this was followed by ninth overall in the Welsh Rally and finishing second in Group 1.

The Scottish Rally saw Ryan and Nicholson come 12th overall and helped win the team prize with two other TR7s. The Manx Rally held in September 1977 was the very last rally where a works entered Sprint was entered, but it ended its rallying career on a high, managing seventh overall and first in Group 1 (both "Class 1" and "Production" classes) driven by Ryan and Nicholson.

Triumph Dolomites continue to be used in classic motorsport today, with cars being campaigned in the UK, mainland Europe, and Australia, as well as the USA. 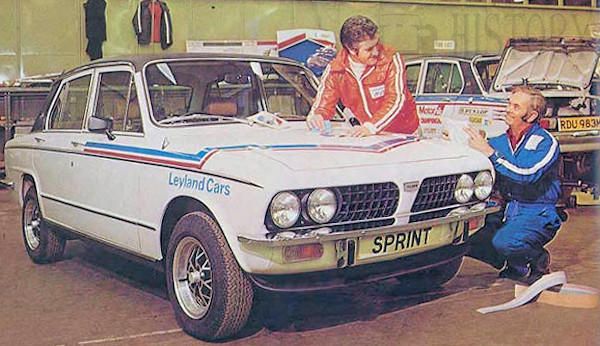