The Triumph TR3 is a sports car produced between 1955 and 1962 by Standard-Triumph in England. The facelifted variant, popularly but unofficially known as the TR3A, entered production in 1957 and the final version, unofficially the TR3B, was produced in 1962.

Although the car was usually supplied as an open two-seater, an occasional rear seat and bolt-on steel hard top were available as extras.

The car was powered by a 1991 cc straight-4 OHV engine initially producing 95 bhp (71 kW; 96 PS), an increase of 5 hp over the TR2 thanks to the larger SU-H6 carburators fitted. This was later increased to 100 bhp at 5000 rpm by the addition of a "high port" cylinder head and enlarged manifold. The four-speed manual gearbox could be supplemented by an overdrive unit on the top three ratios, electrically operated and controlled by a switch on the dash. In 1956 the front brakes were changed from drums to discs, the TR3 thus becoming the first series production car to be so fitted. 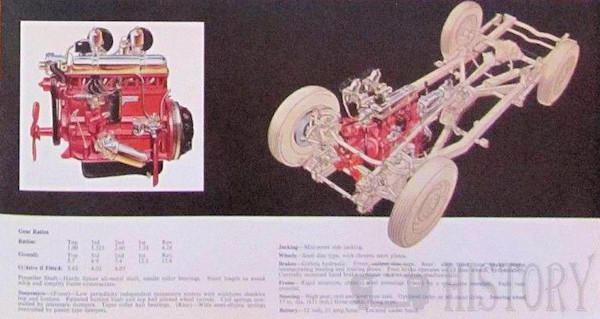 The suspension was by double A-arms, manganese bronze trunnion, coil springs and tube shocks at the front, optional anti-roll bar, and with worm and peg steering. Unlike MGs of the same period, the steering mechanism and linkage had considerable play and friction, which increased with wear.

The rear was conventional leaf springs, with solid axle and lever arm dampers, except that the (box) frame rails were slung under the axle. The wheels were 15-inches in diameter and 4.5 inches wide (increased from 4 inches after the first few TR2s), with 48-spoke wire wheels optional. Wire wheels were usually painted, either body colour or Argent (silver), but matt chrome and bright chrome were also available. The front disc or drum brakes and rear drums had no servo assistance.

The TR3's weight was significantly more than the Morgan Plus Four and the 356 Porsches, but not much more than the MGA and MGB. All except the Morgan, which shared the same engine, were substantially less powerful. 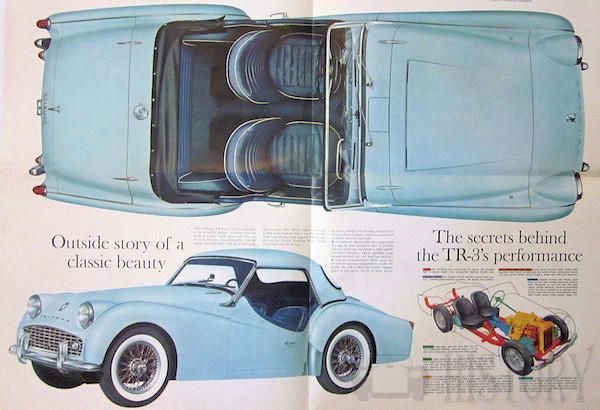 Under most conditions the car was very responsive and forgiving, but it had a some handling vices. The chassis, which was shared by the TR2, TR3, TR3A and TR4 had limited wheel travel, and the car was somewhat tall and narrow for a true sports car. As a result, on very hard cornering, the inside rear wheel would lift, causing sudden over-steer due to the increased load on the outside rear tyre. This was particularly true with increasingly common radial tyres; the original TR2/3/3A suspension was built with older, crossply tyre designs in mind. The wheel lifting was more sudden than that of other cars, because it was caused by coming to the end of the suspension travel while there was still load on the tyre, so the load on the other (outside) rear wheel was a discontinuous function of cornering load, rather than just changing slope.

The TR3 is a true roadster, designed for sunny weather but with removable rain protection. It has a convertible hood (US top) that snaps on and off and removable side curtains, allowing very low doors with padding for the driver's arm to rest on. There are holes in the floor, with rubber plugs, so that the originally supplied jack might be used from inside the car, as did the Jaguar XK120. The optional heater was poor and the shut-off valve was under the bonnet (US hood). A third person could get behind the seats, if absolutely necessary.

In 1957 the TR3 was updated with various changes including a full width radiator grille and this facelifted model was commonly referred to as the Triumph "TR3A". However the cars were not badged as such and the "TR3A" name was not used officially, as is evident from contemporary sales brochures. The "TR3A" was built between 1957 and 1962.

The "TR3A" was a minor update from the TR3. The updates included the new wide front grill, exterior door handles, lockable boot handle and came with a full tool kit as standard (this was an option on the TR3). The total production run of the "TR3A" was 58,236. This makes it the third best-selling TR after the TR6 and TR7. The TR3A was so successful that the original panel molds eventually wore out and had to be replaced. In 1959 a slightly modified version came out that had raised stampings under the bonnet and boot hinges and under the door handles, as well as a redesigned rear floor section. In addition, the windscreen was attached with bolts rather than the Dzus connectors used on the early "A" models. It is estimated that only 9,500 of the original 58,000 built survive in the world today.

The Triumph TR3 was the first production car to include standard disc brakes, which were continued on the "TR3A" facelift. The car was known for its superior braking ability, making it an autocross favourite.

The "TR3A" is often seen in Vintage and Production racing today. The "TR3A", despite being almost 50 years old, is still competitive in the E-Production class of SCCA (Sports Car Club of America). 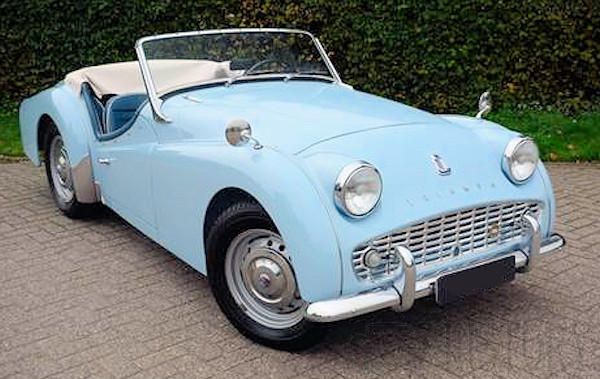 The "Triumph TR3B" is an unofficial name given nowadays to the final version of the TR3, which was produced in 1962. It was offered concurrent with the TR4, which started production in 1961. The "TR3B" was a special short-production run in response to dealer concerns that the buying public might not welcome the TR4.

In the novel, Goldfinger a Triumph TR3—Owned by Tilly Masterton  she uses it to pursue Goldfinger across France. Bond later rams this car with his Aston Martin. 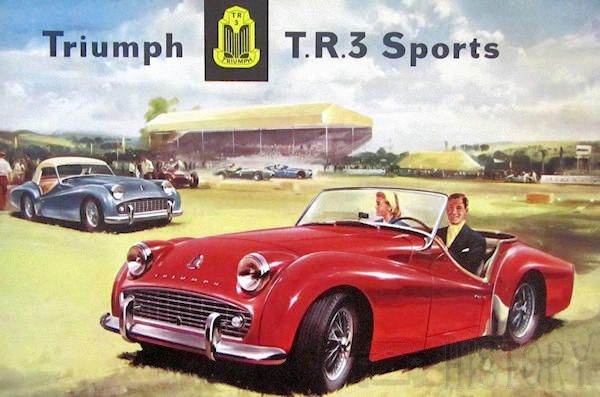