The Toyota GTV (Gas Turbine Vehicle) was a concept vehicle by Toyota with a gas turbine engine. It was first shown at the October 1987 Tokyo Motor Show.  A very sophisticated concept vehicle, it was based on the Toyota Carina, and was in fact a proof of concept vehicle slated initially for small-scale production.

A measure of Toyota's intent with the vehicle was its allowing journalists from Car Magazine to review the vehicle in 1986. Their view was favourable with regard to the overall performance of the vehicle, although the natural turbine lag of the engine did hurt the overall impression of the review. The CVT automatic gearbox did however endear the vehicle to testers - this gearbox has now become the cornerstone of Toyota automatic gearboxes, and the basis of the Toyota Prius gearbox. The GTV was also reviewed by Popular Science magazine. 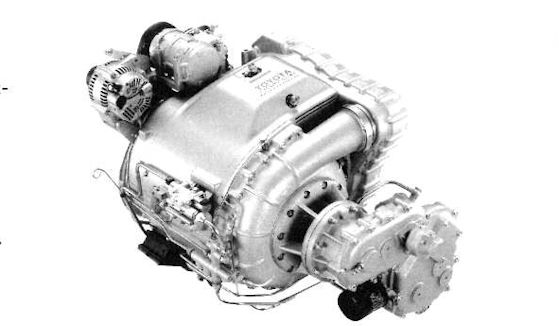 The GTV used the Gas Turbine II engine. A one-stage turbine was used to drive the compressor while a second turbine was connected to the drive shaft. The second stage also took the place of the fluid flywheel (torque converter). Unlike the earlier Chrysler Turbine Car, the GTV had a de-coupled gas turbine (i.e. output was by a separate turbine) with a two-stage heat exchanger designed to reduce the exhaust gas temperature. The compressor turbine spun at up to 68,000 rpm while the output turbine spun at up to 65,000 rpm. A regenerator took waste heat and transferred it to the incoming air, increasing efficiency. The engine output was reduced by 10.13 before being mated to the gearbox, giving a maximum power of 148 hp (110 kW) at 5300 rpm and a maximum torque of 245.9 lb·ft (333 N·m).

Earlier versions of the Gas Turbine engine were shown at the Tokyo Motor Show in 1975 (in the Toyota Century)  and 1977 (free standing).