In April 1969, a whole new generation of the Publica was launched. The car was effectively now a scaled down version of the Corolla, sitting on a shortened Corolla wheel-base. While the air-cooled 790 cc 2U engine was retained in the cheapest domestic market versions, the cornerstone of the lineup was now the new K-series four-cylinder, water-cooled 993 cc engine (designated 2K) with 58 PS (43 kW), a lower-displacement version of the 1,077 cc engine used in the contemporary Toyota Corolla. The Publica 800 has 40 PS (29 kW) and a top speed of only 120 km/h (75 mph), while the 1100 SL could reach 155 km/h (96 mph). The 800 and 1000 were available with Standard or Deluxe equipment, both in Sedan and Van bodystyles. The Van was somewhat slower, with claimed top speeds of 115 and 135 km/h (71 and 84 mph) for the respective versions.

Originally a two-door sedan and a three-door wagon (called Van in Japan, as it was intended for commercial use) were available. The pickup version, added in October 1969, was now officially known as "pickup". The pickup was originally only available with the 1 liter engine, although the 1.2 was made available after the January 1972 facelift. The situation in the Japanese market changed, as demand developed rapidly, partially fuelled by the post-WWII baby boomers coming of age and gaining their driver's licenses. Having the Corolla firmly established as the family car offering, Toyota did not market the Publica as the "popular car" anymore, but rather as an entry-level vehicle for first-time young buyers.

Many of the commercial iterations of the Publica were built by Hino Motors at their Hamura plant, beginning in 1970. Daihatsu also built Publicas, starting in September 1969. In 1969, the Publica dealerships were renamed "Toyota Corolla" dealerships.

The most powerful version was the Publica SL, which featured the 73 PS (54 kW) 1.1 L K-B twin carburetor engine also offered in the Corolla SL. In September, after only half a year, this engine was replaced by the 1.2 L 3K-B unit in both the Corolla and Publica SL's. At the same time, the Toyoglide automatic transmission became available in 1 litre Publicas. As Toyota had just started its relationship with Daihatsu, in 1969 the latter launched the Daihatsu Consorte, which was essentially a mildly restyled P30 Publica. It was, however, powered initially by Daihatsu's own 1.0 litre "FE" engine, which had already seen service in the previous Daihatsu model, the Compagno.

1970 saw minor changes to the range, including a new instrument panel, and a new High Deluxe version featuring the single-carburetor version of the 1.2 L engine and front disc brakes. A more substantial facelift took place in January 1972, when the KP30 Publica was given new front and rear fascias and a new "semi-fastback" style. The U-engine model was dropped at this time, as the boxer unit could not clear emission standards anymore. 1973 saw the introduction of the Toyota Publica Starlet (designation KP40), a coupé version of the facelifted Publica. The last new version of the sedan was the KP50, a sedan version which featured the de-smogged 3K-U engine with 64 PS (47 kW). In June 1976 a five-speed transmission became available in the P50, the first Publica to be thus equipped. The facelifted sedan continued in production until January 1978, when it was replaced by the KP60, marketed as the Toyota Starlet. The Van was built until June 1979, while the Publica pickup was not withdrawn until August 1988. Later pickups were fitted with the desmogged 1,166 cc 3K-HJ (from November 1975) and then the 1,290 cc 4K-J engines (from June 1979), although export versions retained the 1-litre 2K engine. The pickup also received a five-speed gearbox from August 1985.

The P30 Publica with the 993 cc 2K engine was known as the Toyota 1000 in non Japanese markets. With a DIN rating, the engine had 45 PS (33 kW) in export trim. The Toyota 1000 continued to be the only offering smaller than the Corolla in most export markets even after the Publica replacement (the P40 Toyota Starlet) was introduced for Japan in 1973. Branded as the Toyota 1000, the car was launched on the West German market, at the time Europe's largest national auto-market, in the fourth quarter of 1974. It had an unusually lavish list of included features that included radial tyres, front headrests, tinted windows, a heated rear window and even a radio. In some European markets such as Switzerland and the Netherlands, it was marketed with the additional name "Copain". 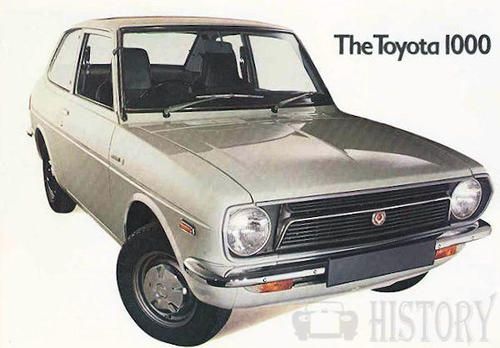