Due to the introduction of the Corona, the dramatically restyled and enlarged Series S40 was launched in 1962, and saw the introduction of the Custom model. According to the Japanese Wikipedia article for the Crown, the styling was said to be influenced by the recently introduced Ford Falcon in 1960. The front grille approach has a similar appearance to the 1960 Imperial Crown (Chrysler), which speaks to Toyota's aspirations that the Crown be a large, comfortable sedan.

The station wagon body style carried over from the previous generation Masterline, but with more attention to the luxurious approach used on the Crown. Headlights were integrated within the boundaries of the greatly enlarged grille, providing a clean, modern appearance. A 2-speed automatic transmission was introduced, called Toyoglide, with a column shift. A bigger and better car than the previous S30 series, it initially had four-cylinder R-series engines before the addition of the "M" six-cylinder engine in 1965. Deluxe and Super Deluxe models were available with added features.

The sedan and wagon were known simply as the Crown while the commercial vehicles (coupe utility, double cab coupe utility (pick ups), and van) were known as the Masterline. There was also a limited run of the sedan known as the Toyota Crown S (MS41S) which featured a twin carburettor intake manifold on the 2.0L M in-line-six engine and disc brakes on the front.

This Crown became the first Toyota to be exported to Europe, after the head of Denmark's Erla Auto Import A/S saw it at the Tokyo Motor Show. They brought in 190 of these subsequent to a May 1963 agreement. In the US, the MS41L sedan was available in the US for $2,305.00 PoE while the MS46LG station wagon was available for $2,525.00 PoE. Some optional features include an automatic transmission for $160 and a radio for $60.

A two-door Crown Convertible was displayed at the 1963 Tokyo Motor Show, based on the Crown 1900 sedan. It was not put into production.

This Crown generation was the first to be assembled in Australia, from CKD kits, by AMI in Port Melbourne, with significant local content. AMI, which assembled numerous brands including Triumph and, for a short time, Mercedes-Benz, was to become the basis of Toyota's current Australian manufacturing operation.

The longer, wider and more upmarket Crown Eight (ja:トヨタ・クラウンエイト) was introduced in 1964 for the Japanese market, powered by a 2.6 L V8 engine. However, it had a different model designation, VG10. The car was first introduced at the 1963 Tokyo Motor Show and introduced for sale on April 20, 1964, nine days before Emperor Showa's birthday and the beginning of Golden Week in Japan.

The Crown Eight was designed primarily to replace full-sized American automobiles that were commonly used by major corporations. The Crown Eight represents the first Japanese mass-produced vehicle with an 8-cylinder engine. The main rivals at the time were the Prince Gloria Super, Mitsubishi Debonair, and Nissan Cedric Special, all equipped with a six-cylinder engine. It was the first Crown to exceed vehicle size classification regulations in length, width and engine displacement capacity. The width at 1,845 mm (72.6 in) compares to the Century at 1,890 mm (74 in), and as such no Crown before or since, including the Crown Majesta, has matched the width dimension of the Crown Eight until the year 2008 for Crown and 2009 for Majesta.

The Crown Eight was considered as a possible submission for use by the Japanese Imperial Household Agency as a car to be used by the Royal Family, but it lost out to the Nissan Prince Royal. The Crown Eight was replaced in 1967 by the first Century with the model code VG20. Approx 3,800 Crown Eights were produced. Some of the items that were exclusive to the Crown Eight were electrically powered windows, cruise control, a three-speed "Toyoglide" automatic transmission, and electromagnetic door latches, which were also installed on the Crown Eight successor, the Century. 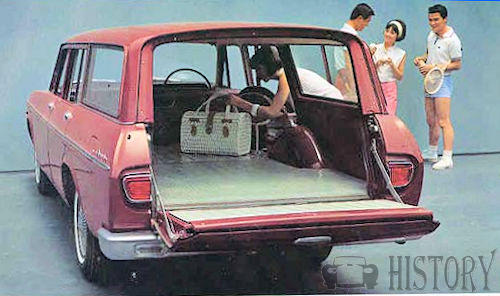