Launched in 1974 in Japan, export began from 1975. It was offered as four-door sedan, two-door hardtop coupe, four-door hardtop sedan, wagon, and van. Engines are 2.0 and 2.6-liter gasoline. The 2.2-liter diesel was introduced September 1978. Trim levels are Standard, Deluxe, Super Saloon, and Royal Saloon. Minor change was given in 1978. This version of the Crown saw the introduction of disc brakes at both the front and rear axles with anti-lock brakes, speed sensitive power steering, and a 4-speed automatic transmission with overdrive. Originally, sedans and wagons had S80-series chassis numbers, while the two- and four-door hardtops received the S90-series chassis numbers. After 1976 and concurrent with the introduction of new stricter emissions regulations, all Japanese market Crowns used S100-series chassis numbers. Export models continued to use the previous codes.

Initially available with the "old style" 4M engine with rounded valve cover, later models switched to the new 4M engine with rectangular valve cover. This generation also saw the introduction of fuel injection on both the 2.6-liter 4M and the 2.0-liter M engines, coupled with Toyota's TTC-C technology, adding a catalytic converter to the exhaust system. Select models also were available with four-wheel disc brakes and twin piston calipers on the front brakes. The models installed with the diesel engine was exclusive to Toyota Diesel Store locations. 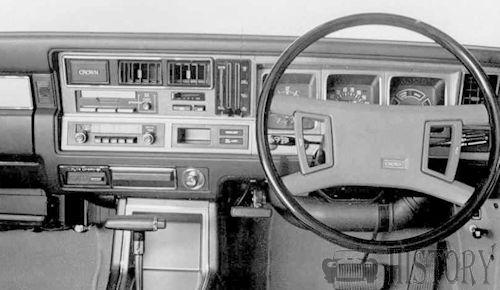 The Hardtop Sedan model has a front chrome grill and square headlights, but was no longer considered a true hardtop, due to the inclusion of a "B" pillar. The styling differences between the hardtop and sedan four-door models was that the side windows on the hardtop were frameless, and the rear window was sloped more than the formal appearing sedan. This series Crown exceeded length regulations of 4.7 m set forth by Japanese regulations by 65 mm, but Toyota continued to offer a 2.0 L engine for buyers who were looking for better fuel economy over the larger six-cylinder engines.

New Zealand models were assembled in New Zealand but on an SKD basis - which meant it had more Japanese content (such as glass) than earlier CKD versions. It was the last Crown built in New Zealand and was replaced in 1979 by the Cressida (MK II), which was available with a four-cylinder engine. The oil crises of 1973/4 and 1979/80 had led the government to impose a 60% sales tax on larger engines, and the Crown could no longer be priced to suit its market 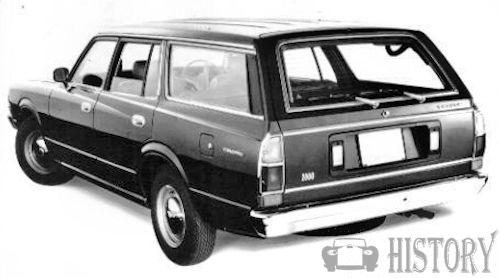