The third generation MR2 had three different names, depending on country; Toyota MR-S in Japan, Toyota MR2 Spyder in the US, and the Toyota MR2 Roadster in Europe. With the previous MR2 having been in the market for almost ten years, the newest MR2 took a drastically different approach than the outgoing model. The new MR2 was a part of Toyota Project Genesis, a plan to attract buyers from the younger age bracket in an effort to increase sales in the US. The most obvious change was the switch from a hardtop/open-roof option to a true convertible soft top, giving the car the 'Spyder' designation.

Many claim that this car was inspired by Porsche Boxster which was released in 1996, due to its similar appearance. However, the first prototype of MR-S appeared in 1997 at the Tokyo Motor Show, which had slightly more angled and rigid appearance than the current production model, which included additional curves for a more aerodynamic and appealing look. The MR2 Spyder chief engineer Harunori Shiratori said, "First, we wanted true driver enjoyment, blending good movement, low inertia and light weight. Then, a long wheelbase to achieve high stability and fresh new styling; a mid-engine design to create excellent handling and steering without the weight of the engine up front; a body structure as simple as possible to allow for easy customizing, and low cost to the consumer." 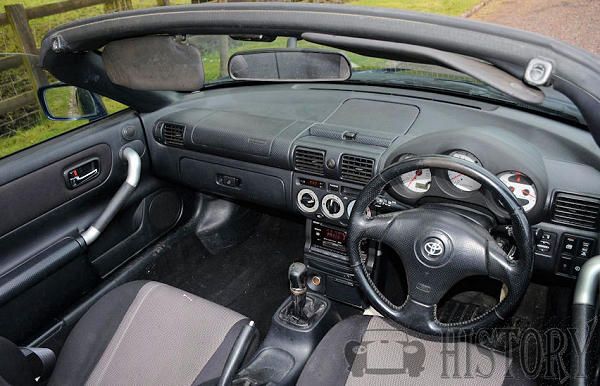 The only engine available for the ZZW30 was the all-aluminium 1ZZ-FED, a 1794 cc inline-four. Like its predecessors, the engine used dual overhead camshafts and 16 valves. The intake camshaft timing was adjustable via the VVT-i system, which was introduced earlier on the 1998 MR2 in some markets. Unlike its predecessors, however, the engine was placed onto the car the other way round, with the exhaust manifold towards the rear of the car instead of towards the front. The 138 hp (104 kW) maximum power was quite a drop from the previous generation, but thanks to the lightness of the car it could still move quite quickly, accelerating from 0 to 100 km/h (62 mph) in 6.8 to 8.7 s depending on the transmission option, the Sequential Manual being unable to launch and shift as quickly as the clutch operated manual. Curb weight was 2,195 pounds (996 kg) for manual transmission models.

In addition to the 5-speed manual transmission, a 6-speed manual or 6-speed Sequential Manual Transmission (SMT) was also available starting in 2002. SMT is standard feature in Australian market; however, air conditioning was optional. After 2003, a 6-speed SMT was an option. The SMT had no conventional H-pattern shift lever or clutch pedal. The driver could shift gears by tapping the shift lever forward or backward or by pressing steering-wheel mounted buttons. Clutch engagement is automatic, and the car will automatically shift to neutral when stopping. Cruise control was never offered with the manual transmission, but was standard for SMT cars.

The MR2 Spyder was also distinguished from most of its competition (including the Honda S2000, Mazda MX-5, and Porsche Boxster) by a standard-equipment heated glass rear window. At the time of its debut, most convertibles were still using a plastic rear window. A hard top was also available from Toyota in Japan and Europe, though it was expensive.

Introduction configuration and changes by year

The MR-S was originally introduced in October 1999 to the Japanese consumer market in three distinct trim models - the "B", the "Standard", and the "S". The "S" trim level included power windows, locks, mirrors, AM/FM/CD radio, cloth seats, tilt steering wheel, and alloy wheels.

In March 2000, the car was introduced into the US and Europe as a "monospec" level, which included the same features as Japan's "S" trim level.

The feedback for the new model was somewhat mixed - some liked its all new design concept, while the fans of the SW20 would've liked it to continue along the path of the previous model. All agreed, however, that the ZZW30 had nearly perfect handling. The ZZW30 is considered to be the best-handling MR2 in both overall limit and controllability. For example, Tiff Needell, a very experienced race driver and the former host of the BBC TV show Top Gear, praised the handling of the ZZW30. Although some clained of the relative lack of power, many owners have opted to switch out the 1ZZ-FE engine in exchange for the 180 PS (130 kW) 2ZZ-GE found in the Celica and Lotus Elise. 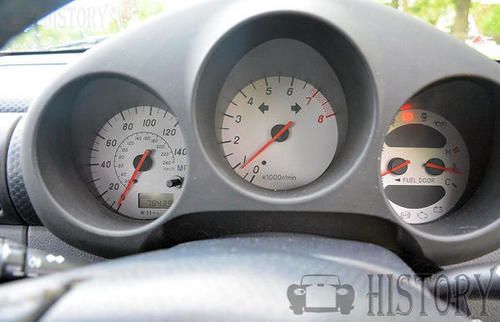 As a farewell to the MR2, Toyota produced 1000 limited-production V-Edition cars for Japan and the UK. They are distinguished by different color wheels, titanium interior accents, minor body changes, a helical limited slip differential, and different steering wheel trim.

The Toyota VM180 Zagato was designed by Zagato, based on the MR-S, and built at Toyota Modelista International for sale in Japan only through the Toyota Vista dealer network. It was first shown on 10 January 2001 in Tokyo and then at the February 2001 Geneva Motor Show. The body panels are attached to the original MR-S chassis, as can be seen by the recess around the door handles. The stock engine was tuned to produce 155 bhp (116 kW). 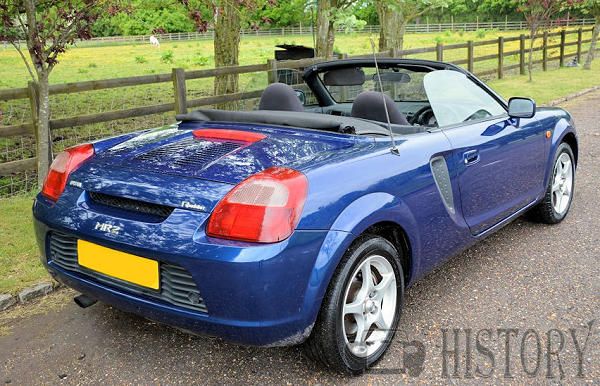