The MR2 went through a complete redesign in 1989 (though North America did not receive them until late 1990 as 1991 models). The new car was larger and weighed 350 to 400 pounds (160 to 180 kg) more than its predecessor. The body styling was now much more rounded and streamlined, bearing a resemblance to both the Ferrari 348 and the Ferrari F355. Because of this, the new MR2 was labeled by some as "The poor man's Ferrari". Despite this, the new look was generally well-received, and undoubtedly helped sales.

There are many subtle visual differences between the normally aspirated and turbocharged models: including the "turbo" emblem (US) on the rear trunk, 'TWIN CAM 16 TURBO' decal above the side intake (Japanese market), a fiberglass engine lid with raised vents, fog lights (though most Japanese and European NA models came with fog lights), and an added interior center storage compartment located between the two seats. All SW20 MR2s came with a staggered wheel setup, with wider wheels and tires in the rear than in the front.

Mechanical differences on the Turbo models include, but are not limited to: 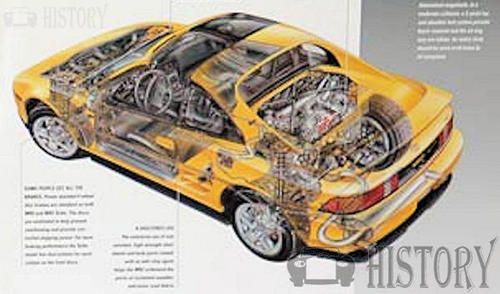 The second-generation MR2 underwent a variety of changes during its 10 years of production, grouped in four different periods:

Changes to the suspension geometry, tire sizes and power steering in Jan of 1992 (as the 93 model year) were made in response to journalist reports that the MR2 was prone to "snap-oversteer". As a counterpoint to the snap-oversteer phenomenon of the MR2, other journalists point out that most mid-engine and rear engine sports and super cars exhibit similar behaviour, and that a change to the driver's response to oversteer is really the solution. In any car, braking shifts the weight forward, and acceleration to the rear. When drivers enter a corner with too much speed, and lift the throttle mid-corner, the weight transfers forward causing the rear tires to lose traction (called lift-off oversteer), which can result in a spin. When improper steering inputs were made attempting to correct this non-power-on oversteer, the rear of the MR2 would swing one way, then wildly (and quickly) the other—thus the term "snap" oversteer. Toyota elected to change the MR2 suspension and tires to reduce the likelihood that this would occur, though many drivers would lament the change and claim that it "neutered" the sharp edge the MR2 was known for. Toyota claimed that the changes were made "for drivers whose reflexes were not those of Formula One drivers." 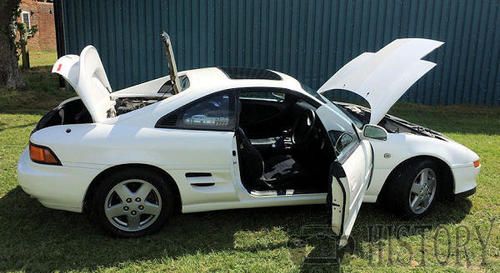 In 1998, Toyota Racing Development offered an official kit body conversion and tuning program for MR2 owners to transform their existing SW20 MR2 into a wide-body TRD2000GT replica car. This was to pay homage to the TRD2000GT wins in the GT-C Japanese racing series, since the TRD2000GT racing series cars were based on the SW20 floor pan. The TRD2000GT body kit widened the MR2 by a total of 100 mm (4 in). Prior to MR2s being fitted with the TRD2000GT body kit, TRD had its customers select which additional engine, suspension, wheel, and interior upgrades they wanted. For these reason, no two TRD2000GT MR2s are alike. It is rumored that at least one was built to produce up to 370 kW (500 bhp) whereas some others had few modifications to their engines. Surprisingly, not all TRD2000GT MR2s were turbocharged. For example, TRD2000GT #001 came with a naturally aspirated 2.2L engine.

The Toyota Technocraft Ltd. TRD2000GT had a 60 mm (2.4 in) wider front and rear track (due to the addition of wider wheels and tires). Virtually every car converted also had other TRD parts fitted too, including extensive changes to both the suspension and engine. Most cars left the factory making more power due to TRD bolt-ons, some cars even left the factory boasting up to 500 metric horsepower (370 kW; 490 hp) and less than 1100 kg (2425 lb) for a very impressive power-to-weight ratio. While TRD Japan only offered a small number of kits with all body parts required for third-party conversion, Toyota Technocraft Ltd. offered complete car conversions.

Apart from the cars listed on the TRD2000GT register it is unknown how many original Toyota Technocraft Ltd. cars still exist today, but it is rumored that approximately 10 conversion kits were imported from TRD Japan into the US for conversions. In many respects, the extended body can be compared to that of a Porsche Turbo wide body. The car's width is extended and body dimensions dramatically changing the car's overall visuals. Very little is known about these cars outside of Japan.

Between 1996 and 1999, Toyota TechnoCraft (TTC) produced 91 MKII SW20 MR2 Spiders. These cars featured a retractable, cloth softtop roof, wingless trunk lid, and an engine lid that was unique to the SW20 spider. Most of these cars were automatics and nearly all of them sported a naturally aspirated engine. Interestingly, Toyota decided against putting its name or logo on these cars as a result of its desire to distance itself from cars that featured leaky roofs. Most of the Spiders came in Lucerne Silver with a blue side moulding and featured black and blue accented cloth seats.

Several of these cars have been imported into the UK.

The Sard MC8-R was a modified and lengthened version of the SW20 built for GT racing by Toyota's works team SARD (Sigma Advanced Research Development). The MC8-R housed a twin-turbo version of the 4.0-liter Toyota 1UZ-FE V8 producing 600 bhp (450 kW). Eligible for the GT1 category, the MC8-R lacked pace against the new generation sports cars and homologation specials such as Porsche 911 GT1, but did compete alongside a similarly modified Toyota Supra. One MC8 road car was built in order to meet homologation requirements, but its current whereabouts are unknown. 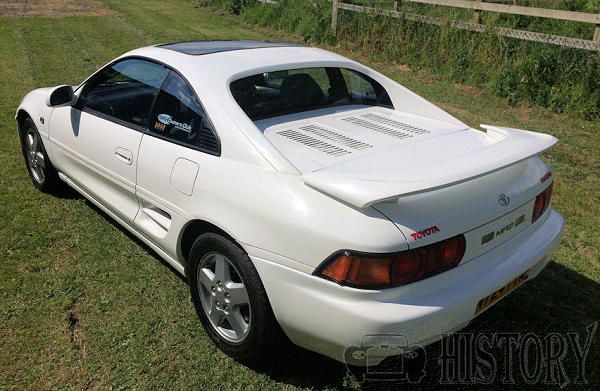