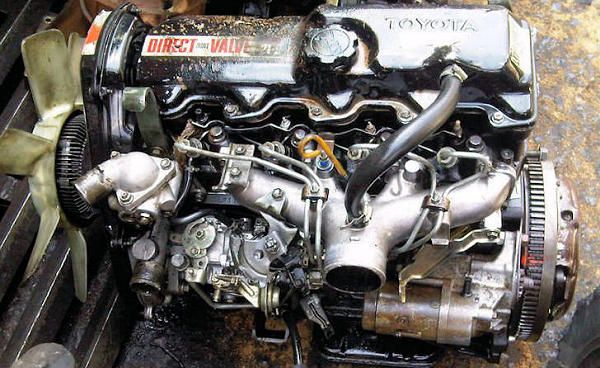 The L family first appeared in October 1977, it is a series of 4-cylinder diesel engines. It is the first diesel engine from Toyota to use a rubber timing belt in conjunction with a SOHC head. Engines like 2L-II and 2L-T are still in production to the present day. Vehicles with the diesel engine were exclusive to Toyota Japan dealership locations called Toyota Diesel Store locations until the sales channel was disbanded in 1988.

The 2L-II is an upgrade of the 2L. Bore and stroke remains the same. The most significant change is that the camshaft lifts the valve directly via tappet instead of a rocker arm. The valve clearance is adjusted using shims. Later L engines (3L and 5L) also use this method of valve operation. Maximum output is 89 hp (66 kW) gross at 4,200 rpm and maximum torque is 149 N·m net or 167 N·m (123 lbf·ft) gross at 2,400 rpm.

Developed as a new version of 2L-T, the 2L-TE features a new development used in Diesel engines at that time, the EFI (Electronic Fuel Injection) system. Although Toyota used this fuel injection system in gasoline engines years before, this is among the first Diesel engines to adopt such a system. Although the basic construction is similar to a modern gasoline injector, the EFI system in 2L-TE utilize considerably higher injection pressures. The EFI system meter fuel with great precision and succeeded in increasing the engine's efficiency. Like the 2L-T, it is 2.4L (2,446 cc) and it is a SOHC (Single Overhead Cam) engine, having 8 valves. It also comes with a Turbo charger. The bore is 92 mm and stroke is also 92 mm. Due to the EFI system, the 2L-TE develops significantly more torque than its predecessor. Maximum horsepower is 97 hp (72 kW) at 3,800 rpm and maximum torque is 22.54 kg·m (221 N·m; 163 lbf·ft) at 2,400 rpm. Redline of this engine is at 4,800 rpm. Compression ratio is 21.0 : 1, slightly higher than 2L-T. 2L-TE was largely replaced by the KZ engine in 1993, although it continued to be used in some models until 2000.