The Toyota MZ engine family is a V6 piston engine series. The MZ series has an aluminium engine block and aluminium alloy DOHC cylinder heads. The cylinders are lined with cast iron, and is of a closed deck design (no open space between the bores). The engine is a 60 degree V6 design. It uses multiport fuel injection (MFI), four valves per cylinder, a one-piece cast camshaft and a cast aluminium intake manifold. The MZ family is a lightweight V6 engine of an all-aluminium design, using lighter weight parts than the heavier duty VZ block engines in an effort to lower production costs, decrease engine weight, and decrease reciprocating weight without sacrificing reliability. Toyota sought to enhance the drivability pattern of the engine (over the 3VZ) at exactly 3000 rpm, since that was the typical engine speed for motors cruising on the highway. The result was less cylinder distortion coupled with the decreased weight of rotating assemblies, smoother operation at that engine speed, and increased engine efficiency.

They feature cast aluminium pistons with an anti-friction resin coating (moly) and valve depressions that decrease the chance of valve-to-piston interference in case of timing belt failure on motors without VVT-i. They also use steel rings, smaller-diameter shot-peened rods, and a forged steel crankshaft.

This engine has been phased out in most markets, replaced by variants of the new GR series.

The 1MZ-FE is a 3.0 L (2994 cc) engine. Bore is 87.5 mm and stroke is 83 mm. Output is 168–190 hp @ 5200–5400 rpm with 183–193 lb·ft of torque at 4400 rpm. Horsepower ratings dropped after the Society of Automotive Engineers implemented a new power measurement system for vehicle engines, Toyota engines rated on 87 octane dropped the most, compared to the same engines used by Lexus rated on 91 octane. It has bucket tappets and was designed for good fuel economy without an overall performance trade-off. Over all, these engines are highly reliable if properly maintained and can reach well over 200,000 miles.

The 1MZ-FE with VVT-i is used in the Avalon, Highlander, Sienna and Camry. Output is 210 hp (156 kW) at 5800 rpm with 222 lb·ft (328 N·m) of torque at 4400 rpm. Early versions of the VVT-i 1MZ used a dual throttle body, cast aluminum intake manifold, and EGR block off plates on the exhaust manifolds. Later versions used a drive-by-wire/electronic throttle control.

The 3MZ-FE is a 3.3 L (3310 cc) version. Bore is 92 mm and stroke is 83 mm. Output is 225 hp (168 kW) with 240 lb·ft (325 N·m) of torque in the Camry and 230 hp (172 kW) with 242 lb·ft (328 N·m) of torque in the Sienna and Highlander. It also features VVT-i, ETCS-i (Electronic Throttle Control System — intelligent/DBW), ABS plastic intake, and increased throttle body diameter over the 1MZ. The 3MZ uses a new flat-type knock sensor, which is a departure from the typical resonator type knock sensor used on the previous MZs. Those MZs had poor knock control, or perhaps oversensitivity when detecting knock, and power loss up to 20 hp (15 kW) may be realized due to erratic ignition timing when using an octane lower than 91. The new flat-type knock sensor is a completely different design and detects more frequencies than the traditional resonator type, and thus, provides the ECU with more accurate data. A bolt goes through the center of the knock sensor, which then mates the sensor to the block on each bank. 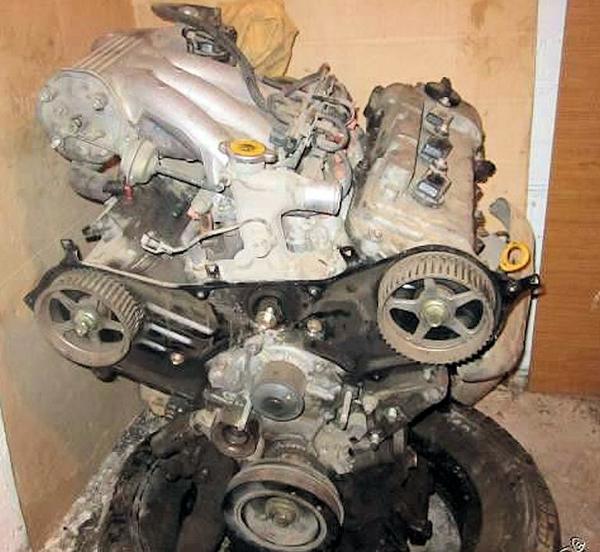