Commercial vehicles manufacturer of Maidstone, Kent Great Britain from 1906 to 1953. 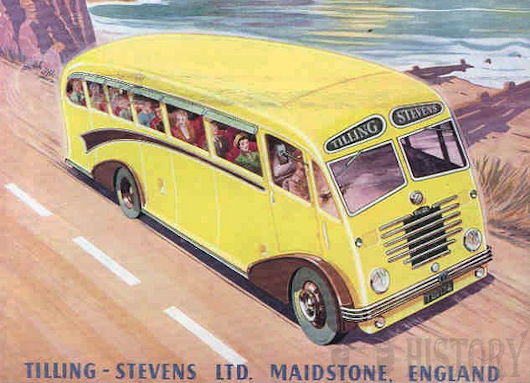 Tilling-Stevens was a British manufacturer of buses and other commercial vehicles, based in Maidstone, Kent. Originally established in 1897, it became a specialist in petrol-electric vehicles. It continued as an independent manufacturer until 1950, when it was acquired by the Rootes Group.

W.A. Stevens was established in Maidstone in 1897 by William Arthur Stevens and had by 1906 built its first petrol-electric vehicle using designs patented by Percival (Percy) Frost-Smith. A petrol engine was connected to an electrical generator and the current produced passed to a traction motor which drove the rear wheels. W.A. Stevens also patented a system for converting conventional petrol buses for either battery-electric or petrol-electric propulsion, patent GB190820210.

The petrol-electric transmission was fitted to chassis built by J & E Hall, of Dartford who used the trade name "Hallford" so these were known as "Hallford-Stevens". Transmissions were also supplied to Dennis Bros, of Guildford these vehicles were named "Dennis-Stevens".

An arrangement was agreed with a large bus operator, Thomas Tilling, who wanted to produce their own vehicles named Tilling-Stevens. The ease of driving and soundness of construction of these vehicles soon led to the company supplying chassis to many bus operators in the UK, and several abroad as well. According to the website of the Birmingham and Midland Motor Omnibus Trust the simpler to operate petrol-electric transmission was popular among bus drivers rather than the conventional crash gearbox (in the days before synchromesh) as few bus staff had previously driven motor vehicles. Tilling-Stevens Motors Ltd was obliged to consolidate its position with bus operators during World War I because the Army considered their petrol-electric chassis were not suitable for use in France. The low-mounted electrical items were considered vulnerable.

Many men were trained to drive during the War on vehicles with conventional gearboxes and developments in gearbox design made their vehicles quieter, more reliable and lighter, resulting in better economy. All this combined to lead to a decline in popularity of the Tilling-Stevens' and other Petrol Electric systems. By the 1930s, TS chassis were being produced with conventional petrol/diesel engines, gearboxes and transmission.

Tilling-Stevens split from Thomas Tilling in 1930 and renamed itself T S Motors Ltd (TSM) in 1932, but were again renamed Tilling-Stevens in 1937, before World War II had broken out.

Tilling-Stevens also produced trolleybuses. An existing customer in respect of petrol-electric buses, WolverhamptonCorporation, decided to replace trams with trolleybuses on one route of their Corporation Tramway and asked Tilling to supply them. The result was an adapted version of the hybrid TS6 model with electrical components by BTH of Bath, Somerset, and body by Dodson. The first six entered service in 1923. Further orders followed from Halifax Corporation and in 1924 the general manager of the Teesside Railless Traction Board designed a trolleybus chassis which was built by Tilling-Stevens. This chassis (designated PERC1) could use a petrol engine to drive the dynamo and power the traction motor as well as being able to take overhead power.

The company subsequently purchased the rights to the Teesside design after receiving enquiries from abroad but domestic production ceased after 1927. Following the initial split from Thomas Tilling, the company produced one further new chassis which was exhibited at the 1930 Scottish Motor Show. Only one sale was made, to Turin, Italy.

Tilling-Stevens also produced goods chassis available with either petrol-electric or conventional gearbox transmissions and built many trucks during World War I. Their cast aluminium radiators were distinctive, with "Tilling-Stevens" cast into the top and either "Petrol-Electric" or "Maidstone" into the bottom tanks.

After the war, they failed to invest in updating their products and ended up building mainly buses. Tilling-Stevens therefore acquired Vulcan Trucks of Southport, Lancashire in 1938 to extend their range (and use Vulcan petrol engines). Production stayed at Maidstone, and Vulcan's production was also relocated there.

The unusual electric transmission became less of an advantage as other makers developed their simpler mechanical transmissions to be reliable and easier to drive. Tilling-Stevens specialised in some unusual markets where the transmission could offer a particular advantage, by also using it as a generator. Some early turntable ladder fire engines were produced where arc lamps for lighting and the electric motors to raise the ladder could be powered by it.

In the 1930s the lorries also lost the large cast radiators in favour of first a thinner cast aluminium shell and then a cheaper steel pressed bonnet and a small diamond-shaped "TSM" badge.

Leading up to World War II they specialised in the searchlight trucks for which they are probably still best known today.

In 1950, the company was sold to Rootes Group. Complete vehicle production ceased in 1953, as Rootes' own truck brands had developed heavier trucks themselves. The plant continued to produce light commercial engines (particularly the iconic Commer TS3 two-stroke diesel, which had been intended for introduction by Tilling-Stevens in 1954) and vehicle bodies, before finally closing in the 1970s, some years after the group had been acquired by Chrysler.

Tilling-Stevens factory was situated in St Peter's St, Maidstone. The factory buildings, built in the 1920s in the Daylight style, survive as of 2012. They were Listed as Grade II in July 2011. It is described as "one few buildings of this style not to have undergone significant alteration from the original".

Petrol Electric engines and their Legacy

The Tilling-Stevens petrol-electric bus is interesting as an early example of a hybrid vehicle, although without any direct engine propulsion or battery storage.

As the petrol engine ran continuously and its chassis weight with a large, heavy motor/dynamo pair was much higher than a mechanical gearbox, it was less fuel efficient than a competing mechanical transmission chassis type. Once mechanical gearbox transmissions were developed enough to become reliable, quiet and easy enough to use, this inefficiency contributed to its demise. Another reason was the simple and fairly inefficient electrical control system, the best that could be achieved in the absence of "modern" electronics. However hybrid petrol-electric cars, such as the Toyota Prius, are now seen as being a partial solution towards cutting carbon dioxide emissions and reducing the risks of damaging global warming.

Many Tilling Stevens Petrol Electric vehicles ended their days as mobile caravans or lorries with travelling fairs and showground people, where the electrical generation could be useful for other things than merely to move the vehicle. Some chassis survived beyond being direct road transport to become generator trailers for these fairs. This helped maintain a stock of dynamo and motor units and even chassis, making restorations possible.

With the electrical generator (a large dynamo) for the motor permanently connected to the petrol engine, the early petrol electric controls available were a sprung return throttle pedal (with a hand operated variable latching throttle to set and adjust the idle speed), a brake pedal, a means of steering (wheel, etc.) and two usually column mounted levers. One centre off lever operated a three position changeover switch to permit running in either direction, and the other lever operated a wiper across a bank of large high current wire wound resistances which affected the motor and dynamo fields, to give the electrical effect of gearing. It was (is, the author of this section has maintained and driven a 1914 TS3 model for over fifteen years as of 2015) very important to set the minimum possible idle speed, or when engaging the direction switch excess load on the system and possible unwanted movement will occur. The resistance "gear" lever is then set to max torque, and then the direction lever set to (say) forward. On releasing the handbrake and pressing the throttle pedal a little the vehicle will glide away smoothly. Giving more throttle and gradually altering the resistance lever will then produce higher speed, with none of the jerking and pauses in acceleration of a gearbox. To stop, the throttle pedal is released, the resistance lever is brought back to "slow speed", the brake applied and as rest is achieved the forward/reverse lever moved to neutral and handbrake applied. There is however NO engine braking available as from a mechanical drive changed into a lower gear, so the system relies totally on the mechanical wheel brakes, which on early chassis applied to the rear axle only.

Apart from the Throttle, engine management controls were usually only a Choke lever and Ignition Advance/Retard for starting the hand cranked engine. On magneto ignition models there would be a simple switch to short the magneto and so stop the engine running. 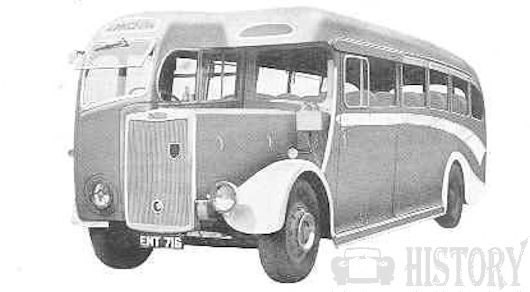