Depending on the dealer network of Ford of Britain offered Fordson Thames 7V or Fordson 7V in 1937 as a successor to the Ford Model BB was first introduced. With a payload of up to 5 tons available, at that time very modern truck in cab-over-construction, made possible a larger maneuverability in urban environment. Two different wheelbases were available, and the chassis provided the basis for various bodies. 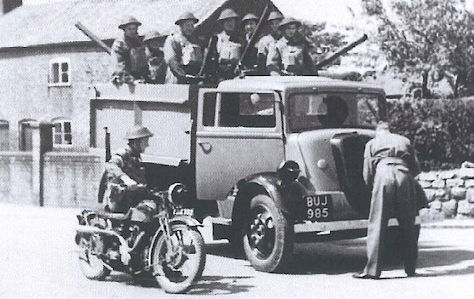 As the Fordson Thames 7V at the time of World War II, it was most widely used as a troop transport and fire engine, The model series was powered by the well-known V8 Ford Flathead side valve engine with 85 hp power. By means of three-speed with optional four-speed manual transmission and cardan shaft, the drive to the rear wheels took place. Outstanding for the time was the one-piece windscreen, which could be opened for ventilation, and a sunroof over the passenger seat.

Early 7Vs built in 1937 and 1938 had a curved, round radiator grille, while from the 1939 built 7Vs it was flat and just like the headlights was smaller. These measures were the result of the beginning of the war and the resulting shortage of raw materials. The production of civilian 7Vs was maintained throughout the war. For the use of the army also an armored version was produced.

Immediately after the war, numerous improvements were introduced, the most outstanding being a new brake system, and a 4.7-liter Perkins engine-series six-cylinder diesel engine with 45 hp was optional from 1948 onwards. Until mid-1949, the model series was produced in Dagenham and replaced by the Fordson Thames ET . Ebro built the model under license as Ebro 7V.