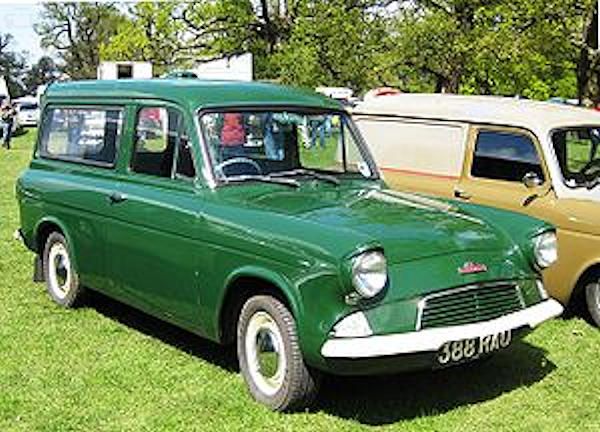 The Ford Thames 307E is a small panel van based on the recently introduced Ford Anglia 105E and launched by Ford of Britain in the summer of 1961. It replaced the Ford Thames 300E and, like its predecessor it was more usually known to contemporaries as the Ford 5 cwt or the Ford 7 cwt van. These names defined, in Imperial measurements, the recommended maximum load weights (equivalent to 250 and 350 kg respectively) of the vehicles. Advertised load space was 73 cubic feet (2,100 L) including 12 cubic feet (340 L) beside the driver.while the 350 kg version had a grill with bright close-meshed metal mesh full width similar to the Anglia Deluxe. The engine was a specially developed commercial version of the Anglia 105E engine with a compression ratio of 7.5: 1 or 8.9: 1. Switched with the new 4-speed gearbox from the Anglia. In 1968 he was replaced by the Ford Escort  I delivery van.

The vans were introduced with a specially developed "commercial version" of the Anglia 105E engine, applying a compression ratio of 7.5:1 or, as an option, 8.9:1.The four speed gear box also came from the latest Anglia.

The 5 and 7 cwt versions could be distinguished from the front by differing grill treatments. The base version had a grill of painted horizontal slats similar to that on the basic Anglia while the 7 cwt featured a full-width bright-meshed metal grill reminiscent of the Anglia deluxe.