Tatra 815 is the name of an extensive and versatile truck family of the Czech manufacturer Tatra . It includes trucks and tractors as well as chassis for special bodies built to handle extreme cold weather .

Tatra-Werke should in future cover the entire requirements of the CMEA countries for off-road vehicles with a payload of up to 20 tonnes. In order to achieve the planned quantities, the production capacities between 1972 and 1982 were considerably expanded by the construction of new plants. Also in the early 1970s, the development of the new type Tatra 815 began. The aim was to streamline production by creating a basic type instead of the previous two series. The first prototypes Tatra 815 were manufactured in 1976 and 1977. In 1981, the production of an extended pilot series began, it included four to five vehicles per month. Serial production began in 1982, at which time the production of the previously produced types Tatra 148 and Tatra 813 . Over the years, the 815 series has undergone numerous further developments in the production program of this manufacturer . Special designs such as the "Arktik" version for export to Siberia or even vehicles for tropical use were also built. In 1997.The Tatra 815 series are made of unified components using the modular principle. These are vehicles with two, three or four axles. Chassis with five or more axles, for example for mobile cranes , were also built. The following basic forms can be distinguished: Trucks for road and off-road use, military and other special vehicles, and chassis for special bodies from other manufacturers. Common to all is the Tatra-typical basic concept with air-cooled engines, central tube frames and pendulum axles .

The coupling is designed as a single-disc dry clutch. Initially, unsynchronized manual transmissions were used on most models, but predominantly on-road types were given synchronized transmissions. Today, the gears are generally synchronized. Generally, a five-speed gearbox is used with Vorschaltgruppe. Tractors for heavy trailers and special vehicles are additionally provided with a two-stage intermediate gear, so that there are 20 forward gears available for these vehicles. The vehicles of the 815 series are predominantly equipped with four-wheel drive, some with front axle that can be switched off. For the predominant road use also versions were made in which not all axles were driven. In the current production program the Tatra 815-2 is exclusively in 4 × 4, 6 × 6 or 8 × 8 configuration listed. Rear differential and intermediate axle differential may be lockable.

It is based on the typical Tatra central tube frame, Its advantages are the high torsional and bending stiffness as well as the protection of the internal components of the drive train. The axes are designed as pendulum semiaxes. According to the modular principle different numbers of axles and wheelbases are realized. This construction gives the vehicles a high level of suitability for off-road use. On the front axles torsion bar springs are installed, the rear axles are provided with leaf springs or air suspension. There are versions with single tires and with twin tires on the rear axles. Steering is mechanical with hydraulic assistance. In the versions with two front axles both front axles are steered. The service brake system is a pneumatic dual-circuit brake with drum brakes on all wheels andAnti-lock system on all axles. It is combined with spring-loaded parking brake, engine brake and dual-line trailer brake system. Today the vehicles are equipped with ABS.

With the Tatra 815 series, the tilting cab was also introduced to this manufacturer. There is the cab in different variants, as short and medium-length cabins and double cabins. In some versions, the short cabin is located directly above the front axle, the climb here behind the front wheel. In most versions, the cabin is slightly forward, the climb takes place in front of the front wheel. The vehicle bodies are supported by a subframe. Apart from chassis, three-way tippers, dump trucks, flatbed trucks, tractor units and tractors with flatbeds were and are delivered ex works.

Together with the Tatra 815 the new engine series T3 was introduced. It is air-cooled , OHV - direct injection with bore 120 mm and 140 mm stroke.With the introduction of the Tatra 815-2, the 10- and 12-cylinder engines were removed from the program and instead used exclusively supercharged V8 engines. They meet the standards of emission class EURO II. (The engines of the pollutant classes up to present EURO V are reserved for the TERRNo 1 vehicle family). Engines from DEUTZ or CUMMINS were also installed for certain export markets.The air-cooled versions are particularly popular in the northern regions of Russia, as arctic temperatures eliminate the risk of freezing coolant. 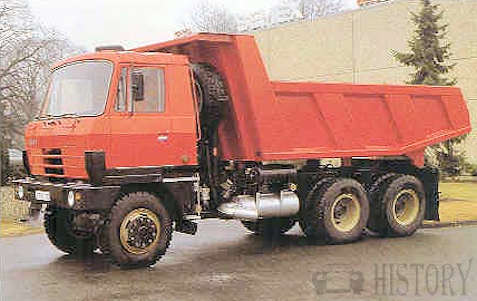