The Tatra 87 was a car of the luxury class with air-cooled eight-cylinder - V engine of the Czechoslovakian manufacturer Tatra . The successor of the Tatra 77 a was - with interruption by the Second World War  - built from 1937 to 1950. A total of 3023 vehicles left the factory in Kopřivnice (Nesselsdorf). Successor was the 1956 introduced type 603 .

The Tatra 87 was presented in 1937. This had a four-door semi-self-supporting body with center beam frame with Y-shaped arms. When predecessor 77 a it was still a body in mixed construction (wooden frame with nailed, in the form of deep-drawn or driven sheet steel parts ) on a platform frame. This compared to the previous model slightly changed body shape  equipped with a sunroof. The installation of a radio was also factory-prepared .Designers of the Tatra 87 were Hans Ledwinka and Erich Übelacker .

The displacement of the engine had been reduced slightly at constant power, the total weight had decreased at a slightly shorter length by 470 kg, which is due in particular to the use of lighter materials (the engine and transmission block and other components are made of electron , an extremely lightweight magnesium alloy ). As with its predecessor, the air-cooled V8 engine was installed in the rear of the Tatra 87, but the cooling air intake was improved at higher speeds. Designed for the then new highways, it reached a top speed of 150 to 160 km / h, 135 km / h was recommended as cruising speed.The engine of the Tatra 87 was used for various purposes, including the prototype of the SW 7 (1943) by Hans Trippel and stationary power generators. Also in the motorized snow sledge Tatra V 855 , which is based on the T87, this engine was used.

In 1948, the body , which had previously been designed in Art Deco style , was modernized with the participation of František Kardaus - with headlamps recessed in the voluminous front fenders, modified bumpers and a modified interior (instruments in ivory instead of black) with more chrome trim on the dashboard. This version, built from 1948, is also known as the "Diplomat" model. The new front is similar to that of the smaller Tatras 600 .From 1936 to 1950 3023 vehicles were built, of which 1371 to 1945, the remaining 1652 units from 1946. The highest annual production in 1948 was 700 vehicles.Between 1950 and 1953, some of the Type 87 were equipped with the new OHV engine of the 603A . These test vehicles were named Tatra 87-603 . 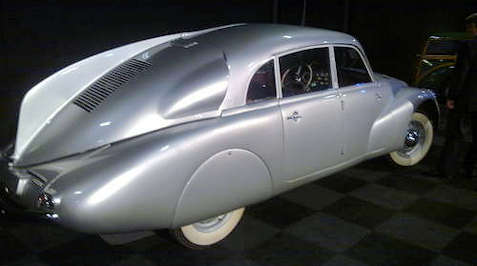