During the 1930s the London factory of Talbot Motors was directed with unerring technical sophistication and skill by Georges Roesch. He had saved the company in 1926 by his introduction of the touring 14/45 Light
Six model, which suffered only from being grossly overweight with a 120" wheelbase and for its 1660cc engine.

In 1930 an enlarged 2.2-litre version was introduced, which was known as the Talbot 90, and this became renowned for its smoothness and silence, its exquisitely made and care- fully inspected seven-main-bearing crank- shaft, and its excellent road manners up to a top speed of at least 80 mph.

Fox & Nicholl Ltd, the London Talbot agents, fielded a beautifully prepared team of lightened sports-racing '90s' from 1930 to 1933 and with 93 bhp at 4500 rpm in continued smoothness and silence they finished third and fourth behind the Bentleys at Le Mans in 1930, and won their class in the TT, Irish Grand Prix and Brooklands 500-Miles Race.

Talbot found themselves once again in the front rank of high-quality sports cars and in 1930 Roesch introduced the straight six 2969cc 75 mm bore x 1 12 mm stroke Talbot 105 model giving 100 bhp as standard or 140 bhp in competition tune. Performance was outstanding for an unsupercharged car, particularly one of such refinement. In 1932 the team of Talbot 105s carried off the team prize in the Alpine Trial, and one car was third at Le Mans in 1932.

In 1932 and 1934. Saloon and coupe models were also made some built by Vanden plas and Pass & Joyce Ltd. When Sunbeam collapsed in 1935, Talbot a related company—was dragged to its knees, and the Rootes Brothers takeover resulted in the sweeping aside of all the standards which Roesch had set for himself and his marque, and of those to which his faithful work-force had built the cars. 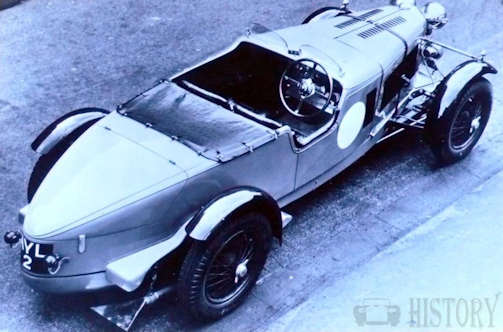