The Talbot Samba is a French motor vehicle model produced by the PSA Peugeot Citroën group in the 1980s; this was the group's last attempt to save the Talbot (ex- Simca ) brand .

The Talbot Samba is a French motor vehicle model produced by the PSA Peugeot Citroën group in the 1980s; this was the group's last attempt to save the Talbot (ex- Simca ) brand .It was also the last new Talbot to be launched, and the last in production. Its demise in 1986 was effectively the end of the Talbot brand for passenger cars. Launched initially as a three-door hatchback, it was also for some time the only supermini available in a factory-ordered cabrio body style, and the most economical car in Europe.

Formally debuted in December 1981, after production began in October 1981. Unlike the Horizon, 1510/Alpine, and Solara, which were all built in France and England at the same time, the model was exclusively assembled in Poissy. Three versions of the PSA X four-cylinder engine, which the Samba shared with its Peugeot and Citroen brothers, were available, along with three trim options. The standard LS had a 954 cc XV engine, the GL had a 1124 cc XW, and the top-of-the-line GLS had a 1360 cc XY. According to official EEC fuel consumption estimates, the GL is "Europe's most economical car," surpassing the previously victorious Renault 5.

On a common platform with the Peugeot 104 and Citroën LN / LNA, the Samba is a lengthened version of the 104 coupe, the structure of which has nevertheless been considerably modified.The Samba range is equipped with the “  X engine  ” from Française de Mécanique .The Samba was released at the end of 1981 in LS and GL version. In 1982 , the convertible designed and produced by Pininfarina appeared, then the Rally version.

The production of the Samba was stopped in 1986 when the Talbot brand was abandoned: “  The Lion (Peugeot) has definitely eaten the Hirondelle (Simca)  ”.The PSA Group, formed in 1976 when Peugeot bought out its competitor, Citroën, took over the former Chrysler Europe in 1979; one its first decisions was to rebrand all of the models manufactured in the French and British factories to Talbot. Among the models inherited from Chrysler was the Scottish-built rear-wheel drive Talbot Sunbeam, the only supermini in the lineup.

The Sunbeam was originally conceived by Chrysler as a stopgap model, developed to keep the Linwood works running—it was based on the running gear of the earlier Avenger made there—while helping the company to maintain a foothold in the growing supermini market.Aware that a more modern design was needed to compete with upcoming front-wheel drive rivals, Chrysler undertook some development work on a shortened version of the Chrysler Horizon (which had the development code C2), dubbed C2-short, but it was cut short by the company's financial problems and plans to divest Chrysler Europe.

PSA decided that the Linwood plant would be unprofitable to maintain and should be closed, which meant an end to both the Avenger and Sunbeam model lines, further emphasizing the need for a new supermini in the Talbot lineup. On the eve of the 1980s, PSA's supermini lineup consisted of models based on the veteran front-wheel drive 1972 Peugeot 104, which came in a shorter three-door and longer five-door version. Citroën rebadged the short-wheelbase 104 as the Citroën LN, and the long-wheelbase chassis formed the base of the five-door Citroën Visa.

In 1979, PSA decided that their new small Talbot would also be based on the 104 rather than the Horizon. Keeping the common underpinnings allowed the new model, known internally as project C15 (later renamed to T15 to reflect the brand change from Chrysler to Talbot) to be launched in 1981, in time to replace the Sunbeam when Linwood would close. In order not to create too much internal competition with the Horizon and Peugeot's planned 104 replacement (which later became the Peugeot 205), the shorter version of the 104 platform was chosen. This made the projected model slot in size slightly below popular superminis such as the Ford Fiesta, but above the smallest cars, including the about-to-be-launched Austin Metro.

As with previous Talbot and Chrysler Europe models, styling of the T15 was the responsibility of the British design centre in Whitley, Coventry. The stylists were limited by the need to retain the entire body structure of the 104, and allegedly were given Peugeot's own proposal of a 104 facelift as a starting point. The resulting design was quite different from and more modern-looking than its progenitor; only the bonnet and tailgate were shared, and the car was given a distinctive front end in Chrysler/Talbot "international" style.

PSA released a few concept and special variants of the Samba to keep interest in the vehicle alive as it neared the conclusion of its existence. The Copacabana was a Samba-based concept car with brightly coloured body components. It was followed by the 1984 Samba Sympa production model, which came in silver metallic paint with a choice of yellow, red, or blue highlights with either a radio or a sunroof, and was marketed at "young customers." Only yellow accents were offered when the sunroof was made standard in 1985. The Samba Bahia (known in the UK as the Samba Trio) was a 1985 model aimed towards younger clients. The 1.1-liter engine, denim-covered seats, and a sunroof were all included. 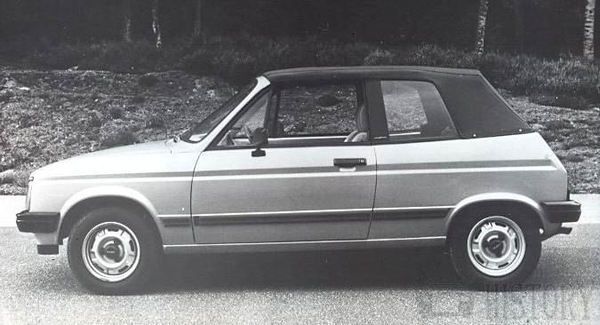 In an effort to make the vehicle stand out in the market against similar rivals, which included its own derivatives, Peugeot added a more glamorous two-door cabriolet to the standard three-door hatchback. Although announced at the hatchback's launch, the first models were not available until 1982. Designed and built by the Italian coachbuilder Pininfarina, who had been building open-top Peugeots since the 1960s, it came only with the 1360 cc engine; two engine versions were offered, 53 or 59 kilowatts (72 or 80 PS)—the latter was dropped after 1984. At the time of its launch it was the only cabrio supermini available from the manufacturer, although other models subsequently entered the market segment created by the Samba, including PSA's own Citroën Visa Decapotable. Pininfarina built 13,062 Samba cabriolets. 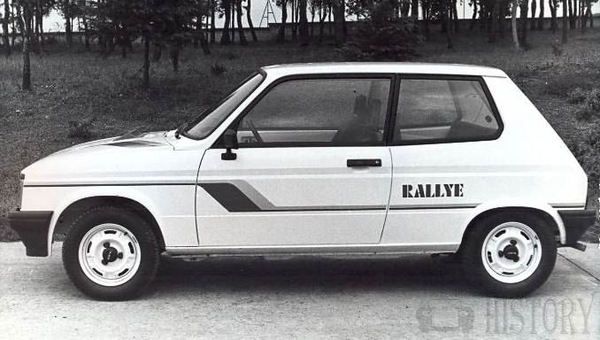 Following the rallying successes of the Simca 1000 and the Talbot Sunbeam, PSA launched the Samba Rallye. Fitted with the 1219 cc XW version of the X engine, delivering 66 kilowatt (90 PS), it came in either white or red, with a hood scoop and side stripes. In 1985, a version with the 1360 cc unit producing 59 kilowatt (80 PS) was launched, without the stripes. A special rallye-only Group B model, officially called the Peugeot Talbot Sport Samba Rallye preceded the later Peugeot 205 T16, with a 1285 cc, 96 kilowatt engine (130 PS).