The Horizon was a subcompact automobile (or supermini) developed by Chrysler Europe and was sold in Europe between February 1978 and June 1986 under the Chrysler, Simca and Talbot nameplates. Derivative variants of the Horizon were manufactured and marketed in the United States as the Dodge Omni and Plymouth Horizon until 1990.

The Horizon was designed by Simca, the French division of Chrysler Europe in the 1970s and introduced in summer 1978. It survived in various guises until 1990. In France it was initially sold under the Simca brand, whilst elsewhere in Europe it was initially badged as a Chrysler. As a result of the acquisition of Chrysler's European car division by Peugeot in 1978, both the Chrysler and Simca brands were dropped and the car was then sold under the Talbot brand in all its European markets.

The Horizon, or Project C2 as it was known inside Simca during development, was intended to be a "world car", meaning that it was designed for consumers on both sides of the Atlantic, but in execution, the European and North American versions of the vehicle actually turned out to have very little in common.

Born largely out of the need to replace the ageing Simca 1100, the Horizon was essentially a shortened version of the larger Alpine model, giving the vehicle an unusually wide track for its length. Featuring the familiar range of Simca-designed 1.1, 1.3 and 1.5 litre OHV engines, and torsion-bar suspension, the Horizon gained praise for its crisp styling, supple ride, and competent handling. It was voted European Car of the Year in 1979. Its launch saw to the end of the 1100 and the rear-engined Simca 1000.

The Horizon was the first British-built hatchback of this size — launched two years before the Vauxhall Astra, three years before the European Ford Escort Mark III and five years before the Austin Maestro. It did not officially replace any of the British Chryslers, despite being a similar size to the traditional rear-wheel drive Avenger saloon and estates which had been on sale since 1970 and did not finish production until 1981.

The North American versions of the Horizon were known as the Dodge Omni and Plymouth Horizon. Although they appeared to share the same external bodywork as the European Horizon (the panels were in fact not interchangeable), they were vastly different mechanically — using a larger engine (of VW, then PSA origins on the early versions, replaced by Chrysler's own 2.2L OHC "Trenton" I-4 later) and MacPherson strut suspension at the front instead of the more complex torsion bar arrangement. They also featured larger reinforced aluminum bumpers to comply with stricter US safety legislation. Despite the car's European origins, then Chrysler chairman Lee Iacocca played this down, emphasizing that features such as the trip computer and electronic ignition were of American design.

In the US, many variants were eventually produced, including three-door coupé versions ("Charger" and "TC-3 / Turismo"), econo versions ("America", "Miser"), and powered-up versions such as the GLH, GLH Turbo, and Shelby GLH-S (turbocharged, intercooled, 174 bhp). Even a small pickup truck was based on the Horizon ("Scamp" and "Rampage"). Some of these cars had successful careers in racing venues such as Auto-X, road and endurance racing, and pro rallying.

In 1981 the revisited models were introduced with minor improvements. By then however, the Horizon was becoming increasingly uncompetitive next to rivals such as the Volkswagen Golf, Opel Kadett/Vauxhall Astra and the third generation Ford Escort. The unrefined ohv engines which had been carried over from the Simca 1100 were largely to blame, while body corrosion was a serious issue, at least until Series II, giving many cars a short service life.

The series two Horizon launched in July 1982 had a 5 speed gearbox, and badged series II 5 speed. The bumpers were painted black and the rear windscreen was smaller, because the parcel shelf was raised to increase the size of the boot. Some models had an electronic LED 'econometer' which lit up several lights around the edge of the speedometer dial, There was also an LED tachometer on top of the range models which was a row of green,yellow and red LEDs and was positioned atop the steering column.

The Horizon was then updated in 1985, with different interior trim again slight changes to instrument dials and door cards were to make the car look more modern. Fewer paint colours were available and fewer models. Many of the late cars, which were built between 1985 and 1987, were painted in an un-sympathetic pale green or cream. Horizons had initially been available in more adventurous colours including orange, but the 1970s era had passed.

A Talbot Horizon turbo concept car was produced in 1984 with a full cream leather interior and sporty body kit, the car was designed at the Whitley design centre, Coventry. The Turbo Horizon is very different to those models once seen out on the street and is kept at Coventry Transport Museum, Coventry England.

Due to corrosion problems there are few left, Horizon is now a rare sight with possibly less than 200 surviving examples in the UK.

The main production lines of Talbot Horizon were Poissy factory in France and Ryton in England. It was also manufactured in Spain and in Finland by Saab-Valmet from 1979 onwards. The Finnish Talbot Horizons integrated many Saab components, especially in the interior. The Saab-Valmet factory also made a series of 2385 cars that ran on kerosene or turpentine.

The Horizon was produced in France and also Britain (where production had begun in the 1980s) until June 1986, and in Spain and Finland until 1987, when it was replaced by the Peugeot 309, a car developed in the UK, originally destined to be sold as the Talbot Arizona. The end of Horizon production in the beginning of 1987 also marked the end of the Talbot badge on passenger cars. However, the North American version of the car continued to be produced until 1990.

The PSA XUD9 diesel engine of 1905 cc diesel engine was fitted to certain models of the Horizon, which was the first example of this engine available in the UK. All UK diesel Horizons were made in Spain. The Peugeot-Talbot brochure of October 1984 shows the only diesel Horizon being the LD1.9, the XUD9 engine only available in the Peugeot 305 GRD as well. The Horizon was not the first diesel in the Talbot family of cars with the Chrysler 180 in Spain being powered by diesel.

The Peugeot 309 continued to use the Horizon range of Simca based engines in early life, until replaced with the more modern Peugeot TU engine in 1992. 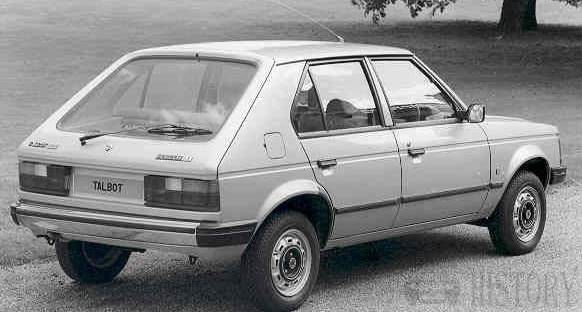 Horizon in the UK

In Britain, it was seen as a modern alternative to the existing Rootes-designed Avenger models, offering buyers a front-wheel drive hatchback alongside the rear-wheel drive saloon. The Avenger was produced alongside it until 1981.

UK sales of the Horizon (which went on sale there in early 1978 and was badged as a Chrysler until 1 August 1979, when it became a Talbot) were initially quite strong, but within five years of its launch it was starting to lose sales in a segment dominated by an increasing number of newer models including the Ford Escort Mark III, Vauxhall Astra, Austin Maestro and Volkswagen Golf Mark II.

The last British Horizons were sold in 1986, soon after the launch of Peugeot's Ryton-built 309 which had originally been intended for sale as the Talbot Arizona, as a Talbot-branded successor to the Horizon, and went on sale in January 1986. The 309 continued the Simca heritage by using Simca-derived engines in its smaller models. 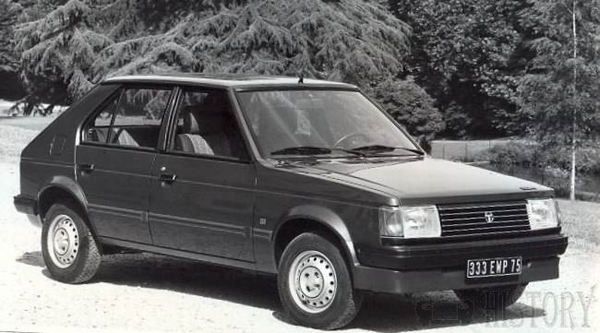