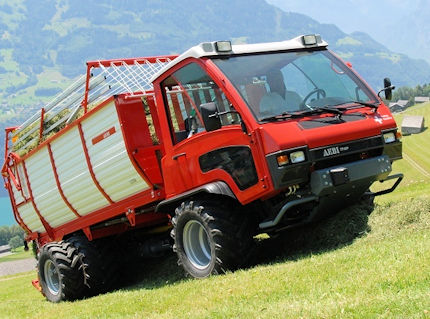 Aebi is a Swiss manufacturer of now specialized  Commercial vehicles  . The company founded in 1883 in the form of a stock corporation is based in Burgdorf .

Aebi manufactures hillside implement carriers, multi-purpose transporters and motor mowers for professional users. The machines are manufactured in Switzerland and exported to over 50 countries around the world. From its foundation in 1893 as a workshop in Burgdorf until 2006, the company was owned by the Aebi family.

In 1895, Aebi started producing the first motorized agricultural machinery with a replica of the McCormick mower. From 1910 threshing machines, forage lifts and tong hoists were included in production and in 1915 a 4-wheel mower tractor was used on an experimental basis. The production of the 3-wheel mower tractor started in 1929.

Subsequently, the company concentrated on the manufacture of small hand-operated mowers and mowing machines with internal combustion engines. Agricultural vans later added to the range.

The most important development step of the company was the specialization in slope equipment. 1954 saw the entry into slope mechanization with the manufacture of the first Aebi single-axle tractor with a drive axle trailer. They produced cross-country trucks  in the 1500 to 3300kg payload  bracket for some years, starting with the open-cabbed 'Transporter' TP2000 with tubular back- bone chassis. Specially designed

The prototype of the Terratrac TT 77, a two-axle mower suitable for slopes, was first presented in 1976.

In 2006 the Aebi group was sold to a group of entrepreneurs around Peter Spuhler and in 2007 Aebi merged with the German group of companies Schmidt Winterdienst und Kommunaltechnik .

The Aebi Schmidt Holding AG employs more than 1,300 people and generated 2013 sales of 294 million euros. The company is wholly privately owned. The majority shareholder is Peter Spuhler's PCS Holding AG with a stake of 57.5 percent. Another 38.8 percent are owned by Gebuka AG and 3.7 percent are owned by other members of the board of directors and management.

The company has been pursuing a course of international expansion since the early 1980s: Aebi Vehicles and Machines GmbH was founded in Kematen in Tyrol (Austria) in 1981 . Aebi France S.à.rl in Genas (France) followed in 1995 and Aebi North America Inc. in Richmond (VA / USA) in 1998.