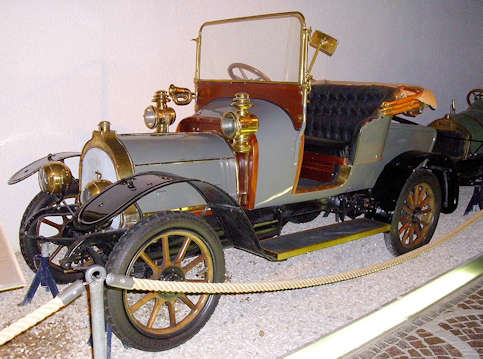 ZL was a Swiss manufacturer of engines , motorcycles and automobiles with the Société des Moteurs et Automobiles Zedel (ZL) subsidiary in France .

Ernest Zürcher opened in 1896 in Neuchâtel a workshop and began in 1897 as the first Swiss entrepreneur with the production of motorcycle engines. After the first successful sales, he joined on January 4, 1901 Hermann Lüthi together and the company Zürcher & Lüthi & Cie SA founded in Saint-Aubin-Sauges . On March 21, 1902, the company in SA Fabrique de Moteurs et de Machines ZL renamed as Hermann Lüthi withdrew from the company.1903 Zürcher founded a branch in the French Pontarlier to avoid the high customs barriers. On June 30, 1905, Zürcher closed the plant in Saint-Aubin-Sauges. On November 11, 1907 Zurich handed over the management of the branch to the Swiss engineer Samuel Graf and started again in Saint-Aubin-Sauges with the production of engines, motorcycles and automobiles.  1908 ended automobile production at the Swiss facility.

The models created in Switzerland were identical to the French models. These were from 1907 the model 8 PS with a four-cylinder engine with 1128 cc displacement as well as from 1908, the model 8/10 PS , and 10 PS known, also with a four cylinder engine and, optionally, 1693 cc or 1791 cc. The open bodies offered as Phaeton room for two people and as Doppelphaeton accommodate four people.

Engine deliveries were also made to Alcyon , Egg , Seebacher Maschinenbau and Yaxa  .The engines were marketed as Zurich. The brand name for vehicles from Swiss production was ZL , for vehicles from French production Zédel . This is a technical term and has been from the initials of the two founders (Z L).