Automotive manufacturer of Zurich;Switzerland from 1904 to 1914. 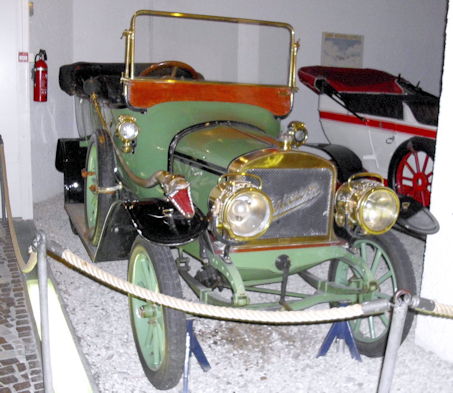 The Turicum AG was a Swiss manufacturer of automobiles in the early part of the 20th century.

The company had about 140 employees in 1913 . The vehicles were exported worldwide, there were even licensed productions in France and Bohemia. Reliability and other races brought numerous successes. After about 1000 built vehicles, production had to be discontinued in 1914.

In 1904, a foot-driven prototype of a single-seater was created, which was equipped with a single-cylinder motorcycle engine and input gearbox. 1905 followed several prototypes of the 2nd generation with friction gear. A leather-covered friction wheel took the force at right angles from a cast-iron flywheel. Translation and speed could be varied in seven stages. 1907 to 1908 received the Turicum type A air-cooled single-cylinder engines with 785 cc displacement (7 hp (5.1 kW) power) or 970 cc displacement.

As early as 1907, there were also water-cooled four and 1909 two-cylinder engines . The four-cylinder models (types B and D) had 1944 cc and 16 hp (12 kW), the two-cylinder model (C series) 972 cc with 8 hp (6 kW) power . Until the end of 1911, they were all equipped with friction wheels and then (only four-cylinder) with optional gear transmission and were offered in numerous, different car bodies or as a chassis.