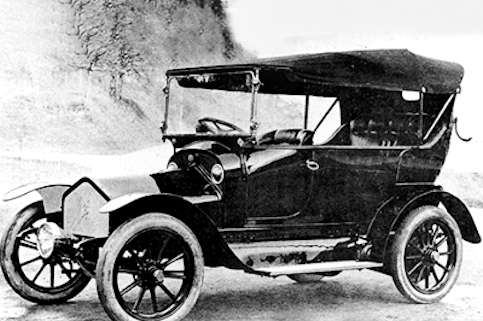 Tribelhorn was a Swiss manufacturer of electric automobiles and trucks from the early part of the 20th century .

The company A. Tribelhorn & Cie. AG started in 1902 in Feldbach with the production of automobiles and trucks. In 1918 it was renamed Electric Vehicles AG and relocated to Altstetten . In 1920, production ceased.

Only vehicles with electric motor were manufactured. The focus was on the production of commercial vehicles, while passenger cars were produced only in small quantities. In 1902, the first prototypes were created. In 1907, the offer consisted of the Phaeton models with a three-seater vis-à-vis body, the model 1 type A , a lightweight two-seater small car , the model 1 type C, a two-seat small car, the model 2 type D with double Phaeton body and the model 1 type E as sedan and Landaulet . In 1918, the luxury car Nautilus appearedwhich was produced only in very small copies.

Tribelhorn was a Swiss manufacturer of electric automobiles and trucks from the early part of the 20th century .
Updated
Sunday, 13 October 2019
Edited By
MCH