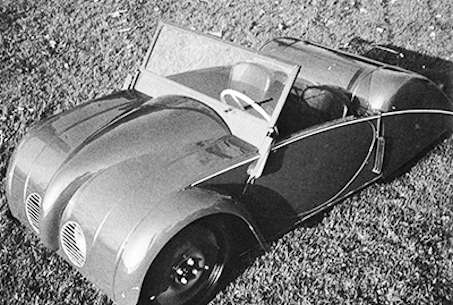 The Rapid Holding AG based in Dietikon is in the engineering industry and in real estate operating Swiss companies. After the second war small cars also produced and later commercial.

The company was founded in 1926 in Zurich by Karl Welter and Arnold Rutishauser under the name Rapid Motormäher AG and launched the first mass-produced motor-driven lawn mower on the market.

From 1946 to 1947 Rapid produced a small series of 36 micro cars of the "Schweizer Volkswagens". In 1947, the company postponed the fabrication to the newly built factory in Dietikon.

Rapid built the single-axle tractor type "S" in 1950. The Rapid "Special" was a machine that could not only be mowed, but also used in combination with a PTO driven trailer as a means of transport in agriculture . The "special" combined with various attachments was one of the first multifunctional devices and was built from 1950 to 1978. Another type was the motor mower Rapid 505, which was produced more than 30,000 times.

In 1964, Rapid built the first self-loading wagon, thus initiating a 30-year development history of two-axle transporters. In 1972, Rapid developed a mowing tractor based on a single-axle machine, which brought progress in haymaking rationalization on up to 65% sloped slopes. In 1973 the Traktorenwerke Bührer was taken over. The production of mower tractors was discontinued in 1992. The van production was abandoned earlier, from the mid-1980s, van were purchased from Lindner and sold in Switzerland as Rapid Alltrac 2000 and 3000 respectively.

The Rapid Holding AG based in Dietikon is in the engineering industry and in real estate operating Swiss companies. After the second war small cars also produced and later commercial.
Updated
Wednesday, 09 October 2019
Edited By
MCH