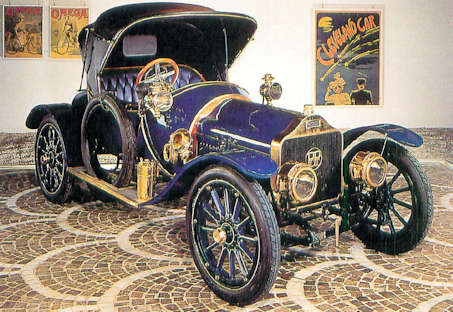 Pic-Pic , short for Piccard-Pictet after Paul Piccard and Lucien Pictet , was a Swiss automobile brand of the manufacturer Ateliers Piccard-Pictet & Cie.

The company transformed into a collective company operating under Piccard & Pictet . In 1898 it became the limited partnership Piccard, Pictet & Cie. , which merged with the public limited company Ateliers Piccard-Pictet & Cie. was converted. In the same year, the company started producing automobiles on behalf of the Société des Automobiles à Genève (SAG) .

The SAG was founded by Lucien Pictet company for the construction and marketing of cars, which at that time only the chassis were sold with motor - the body had to contribute the customer himself. The built vehicles were a construction of Marc Birkigt , which was manufactured under license. The Swiss Marc Birkigt was the later construction chief of Hispano-Suiza . The SAG cars were identical except for the radiator with the first Hispano Suiza vehicles. In 1910 the SAG became insolvent, the bankruptcy estate was taken over by the studios Piccard-Pictet & Cie. accepted.

The production of cars was under the brand name Pic-Pic by the studios Piccard-Pictet & Cie. continued, with up to the First World War, about 1500 vehicles originated in a manufactory-like production. The vehicles had a reputation for technical perfection, reliability and quality. During the war, mainly garnet were detonator for the Entente Cordiale were made. The capital of which collected was invested in a massive expansion of the factory, which should allow for industrial production.

In March 1919 the production of the first series of 500 cars was started. However, the built-in slider valve motor was unsuitable for the mass production of the time, because very small dimensional tolerances had to be adhered to, so that the engine was working properly. Because of the problems in the production, the delivery deadlines could not be met and the cars became unreliable, so that the customers jumped off and the studios Piccard-Pictet & Cie. 1920 were insolvent. Until then, another 1500 Pic-Pic were created.

The banks took over the bankrupt estate and founded in 1921 the Ateliers of Charmilles SA . This led the brand in cooperation with Gnôme & Rhône until 1924 before the production was completely discontinued.

1918 appeared the model 15 CV with four-cylinder slide motor and 2900 cc capacity, but this caused problems in the production.

In 1922, a prototype with slider motor and 3000 cc displacement was presented.