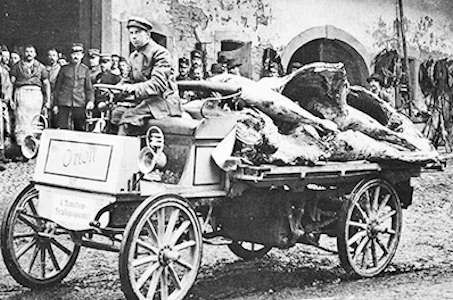 Alfred Zürcher, who previously worked for the Martini Arms Factory, opened a workshop in 1898 in the Hottingen district of Zurich . On June 21, 1900, he founded together with Jean Huber the company Zürcher & Huber, automobile factory Orion for the production of automobiles. . At first automobiles were produced. From 1902 only trucks and buses were created . Between 1903 and 1905, 50 copies of the Oldsmobile Curved Dash were imported and sold. 1904 followed the conversion into a corporation named Zürcher, automobile factory Orion AG . Branch companies existed in Bolognaand Marseille . 1910 ended vehicle production . Between 1918 and 1935, the distribution of vehicles by Mathis . Then came rims, radiators, car heaters and other accessories. 1976 or 1977 followed the takeover by AL-KO .

The only car model was the vis-à-vis . A water-cooled single - cylinder engine was mounted in the front of the vehicle and drove the rear axle. The body shape Vis-à-vis offered space for four people.