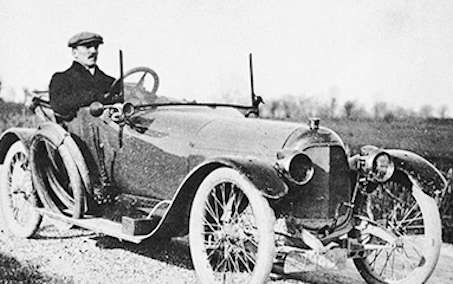 Fritz Moser, Fabrique d'Automobiles et Motocyclettes , previously Moteurs Moser , was a Swiss manufacturer of automobiles  until 1923 and motorcycles in to the 1930s .The brand name was Moser .

Fritz Moser, in previously Zedel worked, founded in 1902 in Saint-Aubin-Sauges the company Moteurs Moser for the production of motorcycles.  From 1914 also automobiles were produced. In addition, occasionally in collaboration with Rudolf Egg cars of the brand name Egg . 1920, the renaming was followed in Fritz Moser, Fabrique d'Automobiles et Motocyclettes .  At the same time a branch in was French Pontarlier opened, created in the motors.1924 ended the car production. In 1930, Fritz Moser retired from his company. 1932 he sold it to the company Allegro . 1935 the motorcycle production ended.

From 1914 , the company manufactured small cars that resembled the compact cars of Rudolf Egg. The vehicles had, however, in contrast to the Egg vehicles a water-cooled V2 engine and chain drive. 1917, 16 Moser automobiles were registered in Switzerland.

1919 was followed by a cycle car , which was exhibited in 1920 at the Mustermesse in Basel . For the drive was provided by a air-cooled V-2 engine. The car with rear single wheel and shaft drive had low strength curve; therefore only a few copies were created. Subsequently, the model Cyclecar 8-10 HP with four wheels was on offer, which had been developed from the car.  An air-cooled V-2 engine provided for driving. The weight was 350 kg and the maximum design speed indicated at 70 km / h. 1923, the production of the vehicle was discontinued.

Fritz Moser, Fabrique d'Automobiles et Motocyclettes , previously Moteurs Moser , was a Swiss manufacturer of automobiles until 1923 and motorcycles in to the 1930s .The brand name was Moser .
Updated
Wednesday, 09 October 2019
Edited By
MCH