The Automobile Monteverdi AG is a former Swiss manufacturer of luxury automobiles, which was founded in 1967 by Peter Monteverdi and was based in Binningen . In the mid-1980s, Monteverdi stopped producing passenger cars. 1990 operated Monteverdi briefly a Formula 1 racing stable.

During the late 1950s and early 1960s, Monteverdi built, sold and drove various custom-made products, while at the same time expanding his father's auto repair shop into a representation of the Ferrari , BMW and Lancia brands . Monteverdi was at that time the youngest Ferrari dealer worldwide. For a short time, he also had the English brands Jensen, Rolls-Royce and Bentley on offer.

Already in the 1950s, Peter Monteverdi began to construct vehicles. First and foremost, these were racing cars. The first models, which were unique or of limited distribution, were marketed under the name MBM . Apart from a handful of racing cars for the Formula Junior (and a derivation for Formula 1 configuration) is here in particular a 1956 closed coupe with plastic body and Ford engine to call, which allegedly made in a small series and the one Single piece as Barchetta with OSCAEngine was set aside. In addition, Monteverdi 1958 dressed a Ferrari Monza after removal of the factory body with a self-designed construction. The vehicle remained a unique piece. It existed until the 1990s; then it was restored by its British owner and regained its initial Ferrari bodywork.

In 1965, there was a split between Monteverdi and Ferrari. Peter Monteverdi then decided to build a production of his own exclusive and luxurious sports and touring cars. In the first sales brochures the brand was called MBM; shortly thereafter - allegedly at the behest of the chief editor of the Swiss Automobile Association - the more prestigious name Monteverdi was chosen as the company name.

Between 1967 and 1984 Monteverdi produced a total of eight different vehicle types with mostly various modifications, in addition, the work presented a number of studies and prototypes.

Monteverdi gave the production of passenger cars in 1984, according to some sources in 1987. Although several other models were planned in the following years and in some cases prototypes were built - for example, a refined version of a Ford Granada  II -, no vehicle reached the production. The work was transformed into a museum, opened in 1985 Monteverdi Car Collection in Binningen. Initially, the museum showed other classic cars, including some Iso Rivolta, in addition to some Monteverdi modelsGrifo. The latter were, however, sold around the year 1990, whereupon the Monteverdi Museum dealt exclusively with vehicles of its own brand. Peter Monteverdi bought back many of his cars during this period, and today at least one specimen of every type of vehicle Monteverdi has ever made is found in the museum.

In 1990, Peter Monteverdi returned to the public by running a racing team in Formula One at short notice . The technical remnants of this venture were used for a final car, the Monteverdi Hai 650 F1 , a sports car with Formula 1 components and without street legal approval.

The Automobile Monteverdi AG still exists today as a company in Basel; Owner is Peter Monteverdi's longtime partner Paul Berger. Since 2013, there are reports of a comeback of the brand. Then Berger plans a new vehicle with the brand name Monteverdi, which will be presented on the occasion of the 50th anniversary of the brand at the Geneva Motor Show 2017. The museum in Binningen, however, is closed on the end of the 2016th Some of the vehicles will be shown in future at the Swiss Museum of Transport in Lucerne.

With the models of the series Monteverdi High Speed ​​375 Peter Monteverdi took in the autumn of 1967 on the production of their own sports cars. Conceptually, these vehicles combined American drive technology - in this case Chrysler - with Italian bodies, designed by Pietro Frua and later by Carrozzeria Fissore . Monteverdi offered various constructions; the program included coupes (375 L, 375 S and 375 Berlinetta short wheelbase), convertibles (375 C and Palm Beach) and a sensational four-door sedan (375/4).

The high-speed series was significant for Monteverdi. It established the reputation of the company as a manufacturer of high-quality sports cars, which still exists today.

The extent to which the production of the high-speed series reached is unknown. Peter Monteverdi never announced concrete figures. What is certain, however, is that the Coupé 375 L is the most frequently produced model in the high-speed range. A certain spread reached the sedan 375/4, where the production figures here vary between 13 and 28 copies. All other models were produced in only a few copies, some of them remained unique pieces.

A special position took the two-seat mid - engine sports car Hai 450 , which was built in two versions as Hai 450SS and Hai 450 GTS. This is a hatchback Coupé, which was equipped with an American eight-cylinder and caused in the early 1970s with reports of breathtaking top speeds for attention. Overall, only two vehicles were created:

The Monteverdi Hai were a lost business in isolation. The expense for the development and construction of the car was offset by the lack of sales. Whether Monteverdi actually had ever planned the serial production of the shark is doubtful. But the concept had been developed too hastily, and the whole car was not mature enough. Overall, it gave the impression of a beautiful, but unsuitable provisional. It was probably Peter Monteverdi's sole intention to maintain an interest in the Monteverdi brand and in the mass-produced coupés with an "eye-catcher". In that sense, the sharks have served their purpose.

An indirect successor of the same name got the shark in the early 90s with the Hai 650 F1. 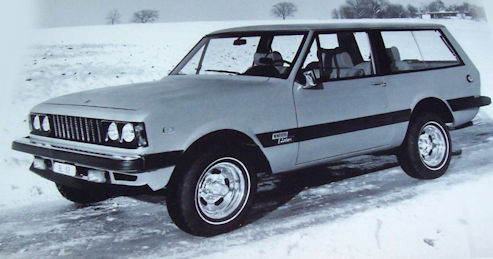 At the time of the first oil crisis , the sale of heavy, thirsty sports cars ceased. While competitors like Iso Rivolta and Jensenstumbled and ultimately failed, Peter Monteverdi managed to completely reorganize his company and ultimately save it over the late 1970s. From 1976 Monteverdi set with a total of three different models on the comparatively new concept of luxurious SUVs. These vehicles, which in turn combined American high-volume production with elegant Italian bodies, sold well in Europe as well as in the Middle East; they reached a total of four figures. The SUVs remained in the program until 1982. The Monteverdi Safari was by far the most successful Monteverdi model, and the company earned very good money on the vehicles. The following models were created:

The Monteverdi Sahara was a barely modified International Scout that sported a new grille, improved interior trim and revised bumpers. The similarity to the starting vehicle was obvious. The Sahara sold only in a few copies.

The Monteverdi Safari was also based on the technique of the International Scout; here, however, the starting vehicle had been much more alienated. The car had an independent body designed and manufactured by Fissore; In addition, different engines were available.

Parallel to the production of the Safari models, Monteverdi soon had the opportunity to produce real Range Rovers.

Returning to a request from British Leyland Switzerland in 1976, Monteverdi developed a four-door version of the Range Rover, which debuted in Geneva in 1979 and was built 167 times by Monteverdi in the following two years. Most copies were sold in Switzerland, some went to the UK, including two, which received the British royal family. From 1982 Rover took over the production itself, but let Monteverdi continue to participate in the coming years through regular royalties on the success of the model.

In the car sector, Monteverdi also implemented the concept of boutique cars : in the autumn of 1976, the Monteverdi Sierra waspresented, a medium-sized sedan with a decidedly unobtrusive design. In fact, the Sierra was an intensely refined vehicle largely based on mass production technology. The donor car was taken over largely and unchanged; ultimately, only details of the exterior design and interior have been changed. The base vehicle of the Sierra was introduced in 1976 in America Dodge Aspen or its clone Plymouth Volaré ; the Carrozzeria Fissore redesigned the front and rear sections. The drive was a 5.2-liter eight-cylinder with quadruple carburetor ofChrysler and a performance of 160 hp or the 5.9 liter version with about 185 hp, which was referred to in a sales prospectus as "hot version". The standard model was a four-door sedan, next to a cabriolet and a station wagon were manufactured in individual pieces.

The Sierra was manufactured from 1977 to 1982. The number of vehicles produced is unknown; a Swiss bodywork company claims to have produced about 20 sierras.

The Tiara was the successor to the Sierra. It was based on the S-Class of Mercedes Benz , whose technical components including the passenger compartment and glazing took over Monteverdi unchanged. The car received an independent front and rear end, which harmonized only limited with the flowing lines of the starting vehicle. The engines used were the large eight-cylinder engines from Mercedes-Benz with 3.8 liters and 5.0 liters respectively. Peter Monteverdi planned to sell the Tiara from 1982 on Mercedes dealers. However, a series production did not materialize. In 1982 at least three exhibition vehicles were created; whether more individual pieces were produced is not known.

The Hai 650 F1 was launched as an indirect successor to the model of the same name from the 70s and presented in 1992 in Geneva. As usual with Monteverdi one is silent about production figures, but it should have been numbers in the single-digit range. The sports car used components of the Formula 1 racing cars of the Onyx Monteverdi team. The drive was a 3.5-liter Cosworth eight-cylinder with almost 477 kW (650 hp). The transmission and powertrain were also taken over, as well as the majority of the chassis. The vehicle received no street approval in Europe.

Monteverdi's roots are in motorsports. Long before Peter Monteverdi started to build his own street cars, he worked on racing cars. Between 1958 and 1990 there were two independent commitments Peter Monteverdi in motorsport, which did not overlap with the production of road vehicles time. Unlike some competitors such as de Tomaso or Iso Rivolta , the 1970 and 1974 temporarily appeared in Formula 1, so Monteverdi did not use motor sports as a promotional instrument.

Monteverdi's first missions in motorsport took place under the name MBM , an abbreviation commonly referred to as Monteverdi Binningen Motors . Between 1958 and 1961 Peter Monteverdi constructed some small cars for the Formula Junior, which used a Mantzel tuned DKW engine. In some sources MBM is therefore also interpreted as an abbreviation for Monteverdi Binningen Mantzel . The culmination of this development was the MBM Formula 1 , a small formula 1 racing car using a Porsche engine. Peter Monteverdi drove him himself at some mountain races and on the Solitude . The car was also for Peter Monteverdi and MBM for the Grand Prix of GermanyReported in 1961. Before the race, however, Monteverdi crashed hard with this car, whereupon he retired immediately from motorsport.

In 1990, Peter Monteverdi bought together with the Swiss entrepreneur Karl Foitek the only founded in 1989 Formula 1 team Onyx Grand Prix , which was then occasionally referred to as Monteverdi Onyx or Onyx Monteverdi . The reason was basically the concern to give the previously Brabham failed son Foiteks, Gregor Foitek , another chance as a driver in Formula 1. For this purpose, the established and experienced regular driver Stefan Johanssonfired after two races. The team had almost no sponsors. It survived in dire financial straits and from the spring of 1990 was mainly operated by mechanics from Peter Monteverdi's Automuseum. After the tenth of 16 races it did not happen anymore. Peter Monteverdi himself designed a Formula 1 model for the 1991 season. The cars were indeed realized, but were no longer used. They are now in Monteverdi's Museum.