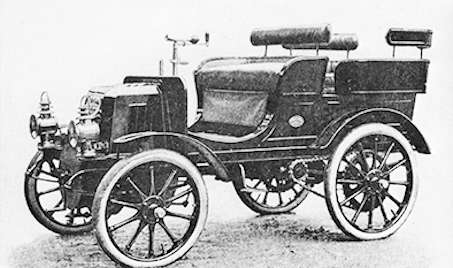 Hercules Automobil-Maschinenfabrik AG, vorm. C. Weber-Landolt was a Swiss manufacturer of automobiles and trucks from the early part of the 20th century .

Carl Weber-Landolt, who had studied in Paris , established a mechanical department in 1884 in the paint and chemical factory of his father GH Weber-Fischer in Menziken . In 1900 he began producing automobiles and trucks. The brand name was Hercules or as Herkules . In 1906 he converted the company into a public limited company . 1913 ended production. Most recently, the company employed 40 people.

The model 6 hp had a single-cylinder engine . The body shape Tonneau could accommodate four people. The design-related maximum speed was specified at 30 km / h. The price including headlights and tires was 2800 Swiss Francs . The model 12 hp was equipped with a four-cylinder engine. The bodywork Break offered space for eight people. The price was 6000 francs. The automobile production ended about 1902. Commercial Vehicles also on offer was many different types. The engines offered either 6, 10, 14, 16 or 30 hp . Until 1906, only two-cylinder engines were used. The payload of the vehicles was between 1250 and 7500 kg. Also a bus with eight seats was offered.

Send
Print
More information on
Hercules Automobil-Maschinenfabrik AG, vorm. C. Weber-Landolt was a Swiss manufacturer of automobiles and trucks from the early part of the 20th century .