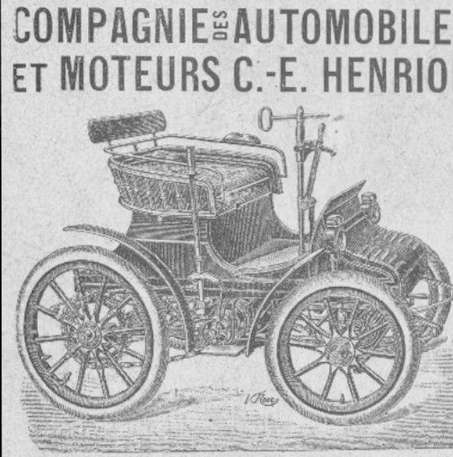 Henriod Frères was a Swiss manufacturer of automobiles in the late part of the 19th century .

Fritz Henriod had already produced a steam car in 1886 and in 1893 a gasoline-powered automobile. In 1896, together with his younger brother Charles-Edouard Henriod, he founded the company for the production of automobiles in Biel / Bienne . The brand name was Henriod . In 1898 the production ended. Charles-Edouard Henriod moved to Neuilly-sur-Seine and founded Henriod et Cie . Fritz Henriod founded in 1903 in Boudry the Société Neuchâteloise d'Automobiles .

In 1886 the presented steam car was a 3 wheel car . The boiler was mounted in the rear. This vehicle remained a one-off and later burned down.The gasoline-powered vehicle from 1893 had a single-cylinder engine and a two-speed gearbox. It was exhibited in 1895 at the national exhibition in the form of four-seater Victoria . Based on this car, the first production models were created. Air-cooled one and two-cylinder engines with 4 to 10 hp were used , which were mounted in the rear.

Henriod Frères was a Swiss manufacturer of automobiles in the late part of the 19th century .
Updated
Tuesday, 08 October 2019
Edited By
MCH