Automotive manufacturer of Morges, Switzerland from 1974 to 1991. 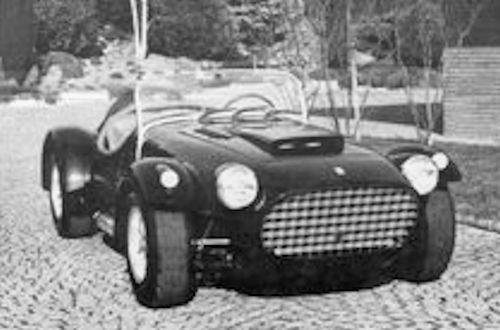 The WH Felber Automobiles SA was a Swiss car manufacturer from the 1970s to early 1990s.

Based in Morges near Lausanne on Lake Geneva , the company was founded in the 1960s by Swiss businessman Willy Felber . First Felber operated under the name "Haute Performance Morges" successful representation for expensive car brands such as Rolls-Royce or Ferrari .

In 1974, Felber then presented on customer request his first self-constructed car, a classic style roadster based on a coupe from Ferrari . By 1984, followed by a number of other vehicles, with the focus of activity increasingly relocated. In addition to individual self-designed Felber from the mid-1970s dealt largely with offering visually altered versions of various mass production vehicles. The vehicles were upgraded with largely unchanged body especially in the interior. An exception were the models Excellence and Oasis , which were also significantly modified externally.

During this time Felber competed mainly with the Basel based company Monteverdi . While Peter Monteverdi, however, could realize a kind of mass production, Felber confined himself to the production of unique items on behalf of customers or small series. During the year 1984 ended the production of vehicles of WH Felber Automobiles SA . This was mainly due to the stricter regulations on type approval in Switzerland and Europe, which made it difficult for small manufacturers such as Felber and Monteverdi to distribute individual models. In the aftermath Felber dealt with the sale and service of imported brands and the restoration of foreign and owned vehicles.

The first construction of Felber was presented in 1974 at the Geneva Motor Show . It was a roadster in the vintage look, whose lines should be based on the statement of his builder on the classic Ferrari 166 Spyder . In fact, the Felber FF was a fairly free interpretation of the original. It featured classic elements such as free-standing wheels and spotlights. The FF was based on the drive technology of the Ferrari 330 GTC and offered outstanding performance in view of a curb weight of only 1,000 kg. In five years, a good dozen Felber FFs were produced at a price of around 100,000 Swiss francs eachsold. The construction of the car took over the British company Panther Westwinds ; on some exhibitions the vehicle was also shown on the Panther stand. A copy was made by the Italian coachbuilder Michelotti. This was the basis for further collaboration between Michelotti and Felber.

A short time later, Felber transferred the concept of the FF on smaller scales, by using the technical basis of the Lancia Beta for another classic roadster . The Lancia FF was largely reminiscent of the design of the Ferrari-based Felber FF. The Lancia models have now been built in the studios of Giovanni Michelotti in Turin .

Distinguished from the Lancia FF is the 1975 Geneva Motor Show presented attempt to produce a replica of the Lancia D24 Spider, which had been used in 1953/54, inter alia, on the Carrera Panamericana. Felber used as a technical basis a contemporary Lancia Fulvia 1.3, which has a new body & body. a. received with round headlights. The car was built only once.

This is a modification of the Ferrari 400, which was converted in 1975 in a Kombicoupé (or a shooting break). The conversion was designed comparatively inexpensive. The C-pillar of the coupe was preserved; only the roof part was extended, and additional windows and a tailgate were installed. By painting the roof in white (compared to a vehicle body in dark blue), the impression of lightness of the roof structure was skilfully achieved. Probably the Felber Croisette remained unique.

On the basis of the Ferrari 365 GTC / 4 Felber made 1975 as a single piece a Shooting Brake ago. The vehicle received with unchanged takeover of the chassis and the drive technology, a completely new body, which went back to a design by Giovanni Michelotti .

The presented at the Geneva Motor Show 1976 Beach Car was to some extent the fun version of a Ferrari. The two-seater car had neither roof nor doors and transferred the concept of the buggies to larger dimensions. Technical basis was a Ferrari 365 GTB / 4 Spyder (after other sources: 365 GTC / 4), whose chassis was taken over unchanged. It was a one-of-a-kind piece developed on behalf of a customer from the Middle East. The production of the vehicle took over Giovanni Michelotti in Turin.

The Felber Excellence was a sports car based on the contemporary Pontiac Firebird . Felber installed a vertical front end with two round and two rectangular headlights and a prominent, crest-shaped radiator grille that became the hallmark of the Haute Performance Morges . At the rear round taillights (from the Fiat 850Spider) installed; the boot lid got in the middle of an increase, which should take up the corresponding design of the hood again. Upon customer request, various other modifications were made, such as the addition of laterally guided exhausts (so-called sidepipes). In three years, a total of 12 copies of the Excellence, most of them in closed form with a tight, vinyl-related roof and notchback. In addition, a single version with hatchback was also produced, also a roadster was offered, which, however, found only in individual pieces spread.

With the Pacha presented in 1978, Felber took up the concept of boutique cars for the limousine market, which Monteverdi had already applied two years earlier with the model Sierra. The Pacha was based on the front-wheel drive Buick Skylark (the Buick version of the GM X-Body) and was provided by Felber with a standalone, angular and overall clunky-looking front end, which had two broadband headlights and in turn the in-house radiator grille. In the interior luxurious changes were made according to customer requirements. The Pacha was available in two and four door versions.A total of 35 copies were built. individual vehicles still exist in Switzerland; In 2005, a brown metallic-colored car was offered for sale.

The most widely used vehicle from Felber is the off-road vehicle Oasis. This is an off-road vehicle that competed on the market for luxurious off-road vehicles prepared by the Range Rover and then Monteverdi with the Safari . Like Monteverdi's Safari, the Oasis was not a complete self-construction. Rather, Felber also used the technical basis of the International Harvester Scout II, a widespread American off-road vehicle with unpretentious technology and compact dimensions for American conditions. Unlike Monteverdi, Felber did not replace the entire body of the harvester. Rather, chassis and body were retained, only the front end was changed in a spectacular way. For example, Felber installed an obliquely forward-sloping, supposedly aerodynamically designed front mask , which also covered the front bumper. The main modifications took place under the sheet metal. On the one hand, Felber lovingly and lavishly redesigned the interior with its full leather interior, sports seats and technical gadgets; On the other hand, the customer was given almost unlimited freedom in engine technology. Felber installed motors fromChevrolet and Chrysler , in one case are even reported by an eight-cylinder by Rolls-Royce . After International Harvester had discontinued the production of the Scout II, Felber continued his concept for some time on the basis of the (smaller) Chevrolet Blazer S10 under the name Oasis Mk. II, before 1984 gave up the off-road vehicle sales.

Unlike the Monteverdi Safari, the Felber Oasis was not a vehicle for mass production. Basically, it was unique pieces that were produced on customer request and implemented the respective requirements as individually as possible. With this concept, the distribution had to be limited from the start. Willy Felber was aware of this, and it also met his goals. A total of about 50 Oasis have emerged, most of which have been sold to the Arab world and the Middle East.

In addition to the production of these vehicles, Felber also dealt to a greater extent with the refinement of European and partly also American makes. Felber was neither branded nor class-bound; The following overview shows that Felber treated cars of different origin and size. He evidently reacted individually to customer requests.