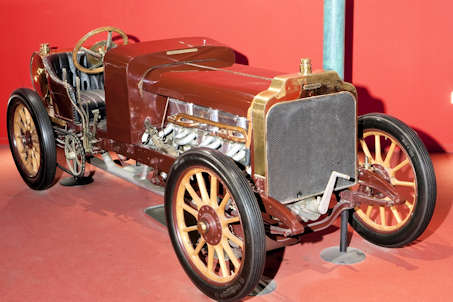 Dufaux et Cie was a Swiss manufacturer of automobiles in the early part of the 20th century.

The brothers Charles Dufaux and Frédéric Dufaux began in 1904 in Geneva with the production of automobiles. Charles and Frédéric Dufaux were cousins ​​of Henri and Armand Dufaux , who had founded motorcycle manufacturer Motosacoche five years earlier .

The vehicle built in 1904 had an eight-cylinder in-line engine with 12,763 cc and an output of about 90 hp at 1200 / min. Due to a defect on the front axle, the car could not start at the Gordon Bennett Cup. In the fall of 1904, this car in Geneva set a record for one kilometer with a flying start at 115 km / h.For the Gordon Bennet race in 1905 Dufaux built three race cars with a huge four-cylinder engine. A vehicle was delivered to the Englishman Charles Stewart Rolls , who wanted to race with it. Due to various defects, the car was sent back to Switzerland.

The engine had two blocks of two cylinders each with a bore of 225 mm and a stroke of 166 mm. The capacity was 26.4 liters. The valves were arranged laterally standing, the ignition took place with a magneto ignition. The power was 150 hp at 1000 rpm. Instead of a conventional radiator, numerous copper tubes with cooling fins were attached to the cylinder heads; the cooling functioned as thermosiphon cooling .The power was transmitted via a metal cone clutch and a three-speed gearbox with chains on the rear wheels. The U-profile chassis had a heavily cranked front axle, which was made from chrome nickel steel after a Dufaux patent and which, like the rear axle, was connected to the chassis with semi-elliptical springs. For weight reasons, the vehicle was allowed to weigh only 1000 kg, was waived on a body; the simple seats for driver and front passenger were mounted on a chassis crossbeam.

In 1907, the production of Dufaux ended.

Dufaux et Cie was a Swiss manufacturer of automobiles in the early part of the 20th century.
Updated
Friday, 01 May 2020
Edited By
MCH