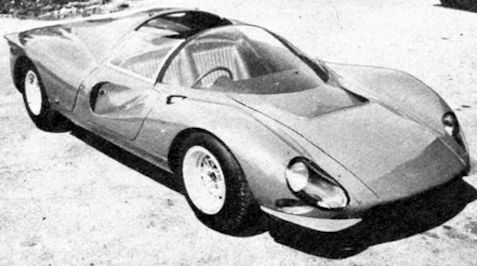 Établissements Cegga was a Swiss manufacturer of sports cars based in Aigle in the canton of Vaud , who built two racing cars for Formula 1 in the 1960s . One of the vehicles was reported in 1962 to two Formula 1 races; However, a regular racing operation in Grand Prix Sport could not be realized.

Établissements Cegga was founded in 1960 by siblings Claude and Georges Gachnang in Aigle. The company name Cegga resulted from the compilation of the initials of C harles E t G eorges G achnang, A igle.

The company was born out of the racing passion of the brothers Gachnang. Georges Gachnang was a hobby racer who participated in numerous races since the 1950s; His brother Claude was primarily responsible for the preparation of the race cars used. In 1960, Georges Gachnang started together with André Wicky in the 24 Hours of Le Mans . They brought their AC Ace prepared by Claude Gachnang with Bristol engine to the finish, but with 239 out of 314 possible laps, they had traveled too short a distance to be classified. Later, the Gachnang brothers took over a 1958 Ferrari 250 Testa Rossa(VIN 0742TR) and upgraded it to the 1961 specification. The vehicle was then called Cegga Ferrari 3000S . Georges Gachnang drove the car in 1961 and 1962 at mountain races.  The 1000 km race at the Nurburgring in 1962 he finished with this vehicle at the 17th place overall; a result that also ranked third in the class for sports cars up to 3-liter displacement.

In 1960, the Gachnang brothers founded a garage operation in Aigle, where they began to build their own sports cars. The experience gained by the revision and production of sports cars led the developed Gachnang the brothers in 1961 and built in a Formula 1 car. A few years later, another Formula 1 car was born, which did not go beyond the test phase.Cegga existed until 1970. However, the Gachnang family remained founded in 1972 by Georges Gachnang Car Garage continue in the automotive industry operates.

Ceggas first Formula 1 car resting on a mostly as "simple" tube frame described which resembled the constructions which were already used in the previous Cegga sports car. All wheels were hung individually. The drive was a 1.5-liter four-cylinder engine, which was purchased from the Italian sports car manufacturer Maserati ; from there came the five-speed gearbox.

The Établissements Cegga reported the vehicle for the first time for the Grand Prix de Pau, a non-Formula One World Championship race, which was held in April 1962. The driver was the Swiss Maurice Caillet . Caillet participated in the training, but could not qualify. A month later, the company entered the Gran Premio di Napoli on the course of Posillipo; Here, too, Caillet missed the qualification.  After that, the Gachnang brothers stopped their Formula One efforts.

Georges Gachnang later reported that Maserati was interested in furthering the Formula One project and offered factory support for future operations. However, the idea could not be realized because of family problems. Instead, the Cegga-Maserati was sold. The car was used in the following years primarily in mountain races; Driver was here, among others, Albino Fontana.

In 1966, another car for Cegga for Formula 1, which was equipped with a twelve-cylinder engine from Ferrari . The vehicle was similar to the Lotus 24 . Georges Gachnang tested the car on the course of Monza . A factory-use racing in Formula 1, however, could not be financed.

The car was instead used from 1967 at mountain races in Switzerland and France. The driver was Georges Gachnang.  Later, Philippe Panis, the father of Formula 1 drivers took over Olivier Panis , the car.

Établissements Cegga was a Swiss manufacturer of sports cars based in Aigle in the canton of Vaud
Updated
Sunday, 06 October 2019
Edited By
MCH