Automotive manufacturer Falköping, Sweden From 1992 to 2005.

Design by Ulf was a Swedish manufacturer of cars .

Ulf Bolumlid founded the company in Falköping in 1987 and started producing automobiles in 1992.  The brand name was Ulf . In 2005 the production ended. In total, about around 50 were made.

The company produced kit cars and kits for kit cars. The first model was the Mania Spyder , an open two-seater. The chassis came from the VW Beetle.  In this case, the engine was mounted in the rear. alternative was a pipe frame for mid-engine layout was also designed in 2001, the production of the Mania Spyder ended . 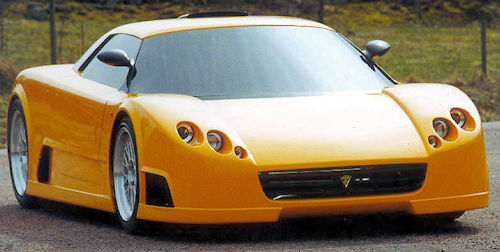 2001 followed the supercar sensor , also with mid-engine . The prototype used a V6 engine from Alfa Romeo .  In the later production models came with V8 engines from Rover or Chevrolet . 2005 marked the production of the sensor .

There were also the models Streamster , Archer and Speedking .  These were vehicles with tubular space frame, aluminum body and twelve-cylinder engine from Jaguar .