Automotive manufacturer of Gothenburg.Sweden from 1927 on

Volvo was originally founded in 1927 as a car manufacturer, but sold the Volvo Car Corporation division to Ford in1999 , which in turn sold it in 2010 to the Chinese Geely group. The Volvo brand and the trademark were transferred to Volvo Trade Mark Holding in 1999 ; they are shared by Volvo Group and Volvo Car Corporation . In December 2017, it was announced that the owner of Volvo Cars , the Chinese vehicle group Zhejiang Geely Holding Group Co. Ltd. with 8.2% largest shareholder of commercial vehicle divisionVolvo Group has become.

Volvo was founded in 1915 by the Swedish ball bearing manufacturer SKF as a test department. The initial goal was only to build test cars to test the then new rolling bearings . 1926/1927 Volvo was founded by Assar Gabrielsson and Gustaf Larson as an independent company. SKF held shares in Volvo until 1935. From this circumstance arise the often differently named founding years. From 1936 to the late 1950s, Brazil had its own company Volvo do Brasil Ltda. for the Latin American market. Only in 1977 was the re-founding of Volvo do Brasil in Curitiba .

In 1959, Volvo was the first car manufacturer to introduce the standard three-point belt, invented by Swedish engineer Nils Bohlin for the group. Following the conversion to right-hand traffic in Sweden in 1967 , sales of car and truck models rose, especially as new model types such as the Volvo 140 and Volvo F88 / F89trucks were introduced. The busesHowever, they already had to wait for the changeover date with doors on the right side, so that shortly before a large demand arose. The abrupt rejuvenation of the fleet of carriages at the bus companies subsequently led to a drastic fall in domestic sales of inland buses, and there were no significant sales figures for the next ten to twelve years in the main sales area of ​​Volvo (at that time there was hardly any export). So the management wanted to stop the bus construction actually, especially since the bus models of the second Swedish manufacturer Scania -Vabis found at that time more widespread. Instead, the plan of the Volvo bus specialist Stig-Arne Olson was applied in 1968 and it became the Volvo Bus Divisionfounded as a self-responsible department in the Volvo Group. Due to shorter decision-making channels, larger export successes were achieved here by deliveries, in particular to Switzerland, the UK and France, but also overseas. In 1969, the formation of the Volvo Truck Division and the Volvo Passenger Car Division took place in the same pattern . Due to the large (export) successes of the F 88 / F 89 truck series and their successors F 10 and F 12, production capacities had to be increased. Therefore, in Belgium, the construction of Volvo models was included in a new plant. In addition, the Bus Division was integrated into a newly built assembly plant for the construction of bus chassis in ViaredBorås relocated.

Until 1973, Volvo was a pure vehicle company. After that, however, many participations and acquisitions followed in other segments. The then CEO Pehr G. Gyllenhammar developed Volvo over the years to a multi- group.

On March 30, 1988, Volvo bought the British company Leyland Buses with the factory in Workington , where in addition to the double-decker (chassis) Olympian and the monoplane bus Lynx from 1990 and buses of the center-motor type B10M are produced. As of January 1, 1989, there was the sales organization VL Bus & Coachbefore on July 1, 1991 Volvo Bus Ltd. completely took over. In 1993, the factory was shut down in Workington, the bus production in the UK was now in Irvine .

At the shareholder meeting in April 1994, the former CEO Sören Gyll presented the end of diversification . From then on, Volvo focused almost entirely on its core business and gradually sold  all other former Volvo subsidiaries outside the vehicle segment , with the exception of the aforementioned Volvo Financial .

In 1998 Volvo sold the production of truck rear axles to Meritor . The original core business of the Group, the car division was in 1999 Ford sold.

In January 2001, Volvo took over the commercial vehicle division of Renault Renault Véhicules Industriels (RVI) including the brand Mack Trucks , but without Renaults share of Irisbus . RVI was renamed Renault Trucks in 2002 . In return, Renault received about 20% of the shares in AB Volvo . In October 2010, all ordinary shares and 3.8% of the voting shares were sold so that Renault currently holds 17.5% of the voting shares. So that the name Volvo continues to be seen in public as a unit and not the image of one manufacturer with the other fundamentally different, there is the Volvo Trade Mark Holding . This was founded at the same time with the sale of the Volvo Car Corporation (Volvo Personvagnar) to Ford by Volvo CEO Leif Johannson and the then Ford CEO Jacques Nasser. This company manages the name "Volvo" and thus brings together in important strategic marketing aspects, both motor vehicle manufacturers together: each 50% of the shares of Volvo Trade Mark Holding belong to the Volvo Personvagnar , the other 50% belong to the Volvo Group, Co-CEOs of the company are on equal footing on the one hand the Volvo Personvagnar CEO Stafan Jacoby and on the other the CEO of the Volvo Group , Leif Johannson. The Boards of Volvo Trade Mark Holding , which consist of employees of Volvo Personvagnar and Volvo Group , meet regularly and discuss joint sponsorship activities, such as: For example, the Volvo Ocean Race , manage brand logos and branding, and ensure that the brand continues to maintain a consistent status in the public.In October 2012, a revised logo was presented at the launch of the Volvo V40 car.

Volvo Trucks is the world's second largest heavy truck manufacturer. Most of the sales are concentrated in Western Europe, North and South America and Asia.

Renault Trucks is one of Europe's largest truck manufacturers. The company offers all types of commercial vehicles: from light trucks for urban transport to special vehicles and heavy trucks for long-distance freight. Already in the 1970s, Volvo and Renault (as " Saviem ") belonged to the so-called " foursome club ", which developed trucks together.

In 1981, the White truck production was taken over with the subsidiary Autocar but without Western Star Trucks from Volvo and in Volvo White Truck Corp. renamed. Group brands were Volvo, White and Autocar. In 1988 there was another merger when Volvo Trucks entered into a joint venture with General Motors (GM). GM brought in the heavy truck sector of GMC . The company became the Volvo GM Heavy Truck Corporation with the brands WHITEGMC and Autocar. In 1995, WHITEGMC became Volvo, In 1997, Volvo took over GM's stake in the company and changed its name again to Volvo Trucks North America . In 2001, the trademark rights to Autocar and some truck models were sold to Grand Vehicle Works Holdings LLC (GVW). Since then, all of the Group's trucks in North America have been sold as Volvo.

Mack Trucks is one of the largest manufacturers of heavy trucks and truck components in North America. The company was fully owned by Renault since 1991 . In 2000, Volvo AB acquired Renault Véhicules Industriels (RVI) (now Renault Trucks), including Mack Trucks in North America.UD Nissan Diesel was almost completely taken over by Volvo in 2007. Nissan diesel produces trucks and buses in Japan. 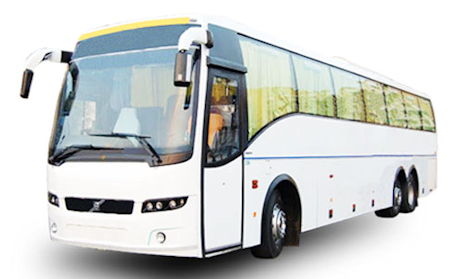 After the Volvo Bus Division emerged as a self-responsible department in the company in 1968 , this was in 1983 as Volvo Bus Corporation (VBC) an independent subsidiary of the Volvo Group. Back in the 1970s, Jim McKelvie's Volvo importer operated the Ailsa Truck Company in Scotland, from which Volvo took over the majority of the shares. From 1974 to 1985, front-engine chassis were produced here as the basis for the preferred double-decker buses here as the Ailsa B55.

As before, the chassis for buses and coaches were made using components such as engines of the larger truck "sister", the bodies were made by (independent) bodybuilders (eg the Finnish company Wiima , through the Carrus Group 1998 came to Volvo) manufactured. In 1981, the Swedish bodybuilder Höglund was taken over in Säffle , so that Volvo could now also offer complete buses. In March 1988, Volvo took over the bus division of the British manufacturer Leyland . In 1990, Volvo took over 75% of the Austrian Steyr Bus GmbH , which mainly serves urban andIntercity buses manufactured for the Austrian market. The takeover of the German touring coach manufacturer Drögmöller was ultimately not so successful. In 1994, Volvo acquired the previously belonging to Leyland Danish bus manufacturer Aabenraa of Kässbohrer . In 1995, Volvo took over the Canadian coach manufacturer Prévost in conjunction with the British Henly Group, in which Volvo for its part participated with ten percent. 1998 followed the acquisition of the also North American bus manufacturer Nova Bus and the Mexicana de Autobuses Anonima (MASA) in Mexico.Today, Volvo Buses is the world's second largest manufacturer of bus chassis and complete buses with factories and more. a. in Sweden ( Borås ), Poland ( Wrocław ), Brazil ( Curitiba ), Mexico ("MASA"), Canada ( Québec , "Prevost") and China ("Xian Silver Bus").

The company Volvo Penta was created in 1930 by taking over the majority of shares in the Penta works. It offers engines and complete propulsion systems for shipping and industry. The Penta factories initially supplied the engines for the first Volvo automobiles, since Volvo began its vehicle production as a pure body and chassis manufacturer , without even producing engines. Although these first automobiles in the company's history were built and distributed by Volvo, the word " Penta" stood on the radiators, Due to the global economic problems in the late 1920s, the company Penta got into financial difficulties. As Volvo did not want to lose its engine supplier, Volvo joined Penta and deleted the word "Penta" from the radiator grille of his automobiles. In 1935, the company Volvo Penta - also based in Gothenburg - officially founded. Volvo Penta's most well-known developments were the Aquamatic, a revolutionary combination of inboard and outboard engines, the Duoprop propulsion system and the IPS rapid propulsion solutions introduced in 2005 for fast recreational craft. In addition, the company was Penta in 1922, the first manufacturer of outboard motorsin Europe. However, Volvo Penta gave up the production of outboard motors during the course of the Second World War for the time being.Engines from the Volvo Penta range can also be found in Renault commercial vehicles, in addition to the Volvo trucks.

The original core business of the group was sold to Ford in 1999. At the beginning of the financial crisis in 2008, the troubled US parent company Ford, the subsidiary Volvo Cars offered for sale, as a reason, red numbers were mentioned in the Volvo car production. In late 2009, Ford announced the sale of Volvo Car Corporation to Chinese car and motorcycle manufacturer Geely . The contract was signed in late March of 2010. The purchase price was $ 1.8 billion.