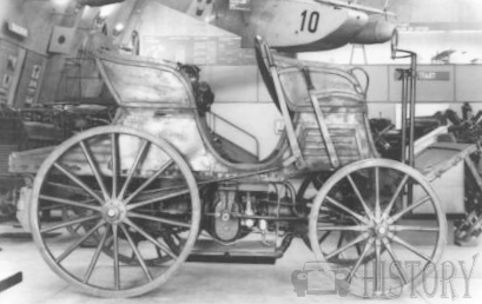 Vabis was founded by Surahammars Bruks AB in 1891 as a factory for rail vehicles V agnfabriks A ktie B olaget i S ödertelge in Södertälje and was a Swedish manufacturer of rail vehicles , passenger and commercial vehicles .

The expansion of the Swedish railway network around 1890 brought with it a great demand for rail vehicles. The production spectrum of the newly founded company Vagnfabriks Bolaget I Södertelge consisted mainly of railway wagons and horse carriages . In addition, the so-called Diamond-bogie was built, which as the first universal freight cars - bogie is considered.

Shortly before the turn of the century, the demand for rail vehicles dropped so much that the car factory was looking for a second and future-proof production line. In the late 1890s, the company developed several prototypes for cars and trucks and set up a production line. In 1906, the name in Vabis , the abbreviation of the previous company name, changed.

The engineer Gustaf Erikson developed from 1897 to 1902 some prototypes of a four-seat car , which was referred to as Surahammar , with engines of their own design. One of these vehicles has been preserved and is exhibited at the Tekniska museet in Stockholm , Sweden .

Between 1903 and 1910 followed cars in small numbers, which were marketed as Vabis.

In 1908, a new 3-ton truck with a 20-horsepower engine was developed, winning the gold medal at the Swedish Royal Automobile Club's international truck competition in 1909, but there was no real market for the trucks, selling only five vehicles per year, in comparison to the company's expectance of 50 per year.
Vabis merged in 1911 with Maskinfabrik AB Scania (founded in 1891 in Malmö , Skåne ) to Scania-Vabis at the company headquarters Södertälje near Stockholm .

Surahammars Bruk kept losing money on the Vabis factory, and tried selling it, with the option of even closing it down if no buyer was found. But a buyer was found in Per Alfred Nordeman, managing director of Malmö-based Maskinfabriks-aktiebolaget Scania, a company with far better success in building automobiles and trucks, and with the need for a partner to build coachwork. An agreement was reached in November 1910, and in 1911 the two companies were merged to create Scania-Vabis, today known as Scania AB. Development and production of engines and light automobiles continued at Vabis' location, while trucks were manufactured in Malmö, together with the headquarters. Headquarters moved to Södertälje in 1912, and truck manufacturing too in the late 1920s.