Automotive manufacturer of Stockholm. Sweden from 1937 to 2014. 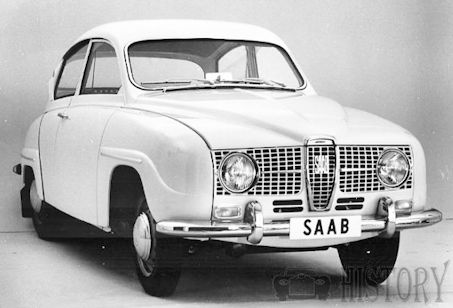 Saab AB is a Swedish aircraft and defense group . The company was founded in 1937 as Svenska Aeroplan Aktiebolaget  from which later "Saab" was derived.The company maintained since 1947 a car division, which traded in 1990 as Saab Automobile AB and 2000 was completely outsourced from the group. In 1969 , Saab merged with the truck manufacturer Scania and traded until the separation of this merger in 1995 as Saab-Scania .

The company was founded in 1937 for the construction of military aircraft as a merger of AB Svenska Järnvägsverkstäderna with Svenska Flygmotor AB in Linköping (Sweden). At first, only licensed products were produced, such as the German Bomber Ju 86A or the American NA-16 . In 1940, production started in Trollhättan . In the same year, the first own design of Saab, the two-seat dive bomber Saab 17 , which until 1948 at the Flygvapnetwas used and also exported to Ethiopia. Another success was the twin-engine Saab 18 of 1942. It was produced in 242 copies and used from 1944 to 1956 as a bomber, reconnaissance , dive bomber and torpedo bomber .

The first jet aircraft of Saab was the 1947 for the first time flown Saab 21R , an advancement of the Saab 21 . 1955 flew for the first time one of the greatest successes of the company in aircraft, the single-seat Saab 35 Draken . This interceptor , equipped with an unconventional double- delta structure , produced 606 pieces that were also exported to Finland, Denmark and Austria, some of which are still flying today. The most modern military aircraft design is the Saab JAS-39 Gripen .

In 1999, Saab acquired a stake in the Swedish defense manufacturer Celsius AB . The following year, Celsius AB and its subsidiary Bofors were fully acquired and the Heavy Weapons Division sold to United Defense . The remaining guided missile production operates since 2000 as Saab Bofors Dynamics, today Saab Dynamics . In June 2006, Saab acquired from Ericssonboth the defense division Ericsson Microwave Systems AB (EMW) and the shares in the joint venture Saab Ericsson Space AB (SES). SES now traded under the name Saab Space as a business unit of Saab.She owned, among other things, the company Austrian Aerospace in Austria. In July 2008, Saab Space was sold to RUAG .

Since 2010, Saab was talking with Boeing about a joint development of a unilateral trainer aircraft , in December 2013, the two signed a contract with Boeing took the lead. The first flight of the Boeing TX took place on December 20, 2016. The consortium and their trainer take part in the TX program of the United States Air Force , which is to replace the 50-year-old Northrop T-38 of the USAF with a new coach. The USAF wants 350 aircraft and the program has a volume of 16.3 billion dollars. The initial operating capability is to be achieved 2024th

At the beginning of December 2011, Switzerland decided to buy 22 "Saab JAS-39 Gripen" fighter jets. The weaker in performance "Gripen" prevailed against the Rafale and the Eurofighter . The lower cost was the main reason for the decision, but only 22 instead of the original 33 new aircraft were ordered. The purchase price is around 3.1 billion francs. The offers of the competitors were about CHF 1 billion higher. However, the purchase was withdrawn as part of a referendum again. In July 2014, the Swedish shipyard Kockums , based in Malmö, was acquired by ThyssenKrupp Marine Systems , a subsidiary of the Thyssen Krupp Group. Kockums presents all military ships and submarines ago.

The first passenger car manufactured by Saab was the prototype Saab 92001 (" Ursaab "), which was completed on 10 June 1947. From 1949 Saab produced the Saab 92 developed in series. In addition, Saab founded the joint venture Saab-Valmet in Finland in 1968 with the Finnish group Valmet in Finland for the production of automobiles. In 1969, Saab took over the truckmanufacturer Scania and since then traded as Saab-Scania .

After losses in the automotive sector in 1989 and failed cooperation plans with Ford Saab-Scania entered into a partnership with the US group in December 1989, General Motors one.  Consequently, it was in March 1990 from the car sector, the Saab-Scania AB, the joint venture Saab Automobile AB was founded. The company shares were 50% each at GM and Saab. 1992, Saab sold his shares in Saab-Valmet. In 1995, the re-outsourcing of Scania AB and the renaming of Saab-Scania in Saab AB . In January 2000, Saab AB sold the remaining shares of Saab Automobile AB to General Motors. Saab AB had thus completely separated from vehicle production.

Under GM, it was not possible to run Saab Automobile economically; continue Saab had to make numerous development work for the American group. GM sold Saab to the small series manufacturer Spyker , who could not raise the necessary funds to restructure the company. As he retired, GM denied new prospects for Saab Automobile important licenses for previous products, including the two Chinese partner companies Pang Da and Youngman . On 19 December 2011, the company's management announced the filing of a bankruptcy petition after all negotiations failed with potential buyers. General Motors blocked the sale to the two Chinese companies in order not to relinquish its technology to Chinese investors.

Saab Automobile AB was dissolved in 2012 and the bankruptcy estate was bought by the newly founded company NEVS . NEVS briefly re- produced the Saab 9-3 , but lost the rights to use the Saab brand in a 2014 bankruptcy trial and now plans to produce electric cars based on the 9-3 under its own name.