Automotive manufacturer of Sweden from 1943. 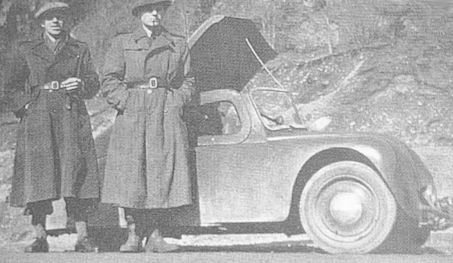 As with many motorcycle manufacturers, Husqvarna first began producing bicycles in the late 19th century. In 1903, they made the jump to motorcycle manufacturing. The first "Husky" motorcycles used imported engines, and it was not until 1918 that Husqvarna began producing machines built entirely in-house. Around that time they secured a contract with the Swedish Armyand began entering cross-country and long-distance motorcycle racing events. In 1920, Husqvarna established its own engine factory and the first engine to be designed was a 550 cc four-stroke 50-degree side-valve V-twin engine, similar to those made by companies like Harley-Davidson and Indian.

Toward the end of World War II, a team comprising Bengt Magnusson (head of R&D), Stig Tham (engineer), Calle Heimdal (engine designer) and Birger Johansson investigated manufacture of a small, simple, inexpensive car. The design looked similar to the Saab 92, but with three wheels (two front, one back), and an unusual split rear window.

The car had similarities with the Saab 92 may have had something to do with Sixten Sason working as designer at Husqvarna. A prototype was built in 1943, powered by a 20 hp (15 kW) two-cylinder 500 cc DKW motorcycle engine with chain drive to the rear wheel. The wheels came from a Fiat 500. The project was cancelled in 1944, and the prototype was scrapped at the end of the 1950s.