The SS90 was a British two-seater Roadster sports car first built by SS Cars Ltd in Coventry, England in 1935. In 1945 the company changed its name to Jaguar Cars Ltd.

The car used a six-cylinder side-valve Standard engine of 2663 cc with an output of 68 bhp (51 kW). The engine differed from the one used in the ordinary cars by having Dural connecting rods, an aluminium cylinder head with 7:1 compression ratio, and twin RAG carburettors. At 8 feet 8 inches (2.64 m) in length the chassis was a shortened version of the one used on the SS 1, and was also supplied by Standard. Suspension was by half-elliptical springs all round, with an underslung back axle. The braking system was Bendix.

The cars rapidly gained attention for their elegant sporting styling, but were not well regarded by the sporting fraternity as their performance did not match their appearance. True sports car performance had to wait for the SS 100, which had similar styling and suspension but an engine fitted with an overhead-valve cylinder head.

The SS 90 does not seem to have been tested independently by any magazines, therefore contemporary performance figures are unknown, but it was widely believed to be capable of reaching 90 mph (140 km/h). In 1932 the basic tourer cost £395. Twenty-three were made. 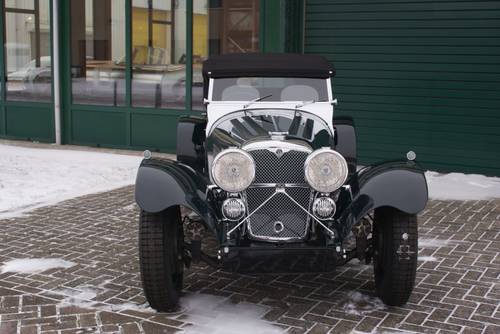