The Swallow Doretti was a two-seater sports car built on Tube chassis utilizing Triumph TR2,mechanicals, made between 1954 and 1955.

The marque came from Swallow Coachbuilding Co. (1935) Ltd. which was sold in 1945 by Jaguar (formerly SS Cars Ltd) to the Helliwell Group which was taken over in 1946 by the British conglomerate, the Tube Investments Group (TI). The Dorreti name was derived from Dorothy Deen, who Managed the Western US distributorship Cal Sales.

The first and only model produced by Swallow under TI ownership was the Doretti, which had a tubular Reynolds 531 Cromolly chassis with a body made of a steel inner structural skin and aluminium outer. Most cars were supplied with overdrive and they were capable of 100 mph. 276 MKI cars were made, including a single fixed head coupe version. Also two MK II cars The car was designed by in-house engineer Frank Rainbow, and produced in the TI factory at The Airport, Walsall, Staffordshire, England.

Swallow decided to build a sports car in the early 1950s, doing a deal with Standard-Triumph's Sir John Black, for the supply of complete engines, gearboxes, axles and suspensions from the TR2, to be built in to a new tubular chassis frame, topped by a steel and light-alloy two-seater bodyshell. The new car, called Doretti, was launched early in 1954, and shocked Triumph and their dealers because it looked so good and clearly handled at least as well as the TR2. The Doretti, however, did not sell well because it was much more expensive than — it sold for El 102 at a time when the TR2 was priced at E844, a whopping 30 the TR2 D— and because it could not be built in sufficient quantities. It per cent price penalty apparently suffered quite badly from poor packaging, for the engine/gearbox assembly had been positioned well back in the frame to help the handling, with the result that there was significantly less passenger accommodation, smaller seats and less boot space than the TR2, with which it was obviously in competition.

Although there was no question of the Doretti bankrupting its sponsors (Swallow might have been small, but the parent company, Tube Investments, could certainly have supported further follies if they had felt so inclined), it was certainly a loss maker, and with sales showing no signs of improving, the Doretti was withdrawn in 1955. It was the first and last car to be built by this concern.

Production stopped in 1955 when the parent company TI changed policy. Allegedly, pressure from the British motor industry, most notably Jaguar itself, led to the cessation of production of the Doretti. It is thought that the directors of TI were pressured in that in the production of the Doretti sports car placed TI at an advantage over their customers buying raw materials, creating a serious conflict of interest. 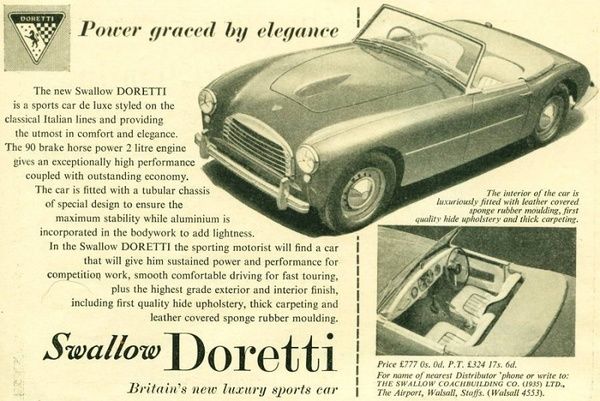 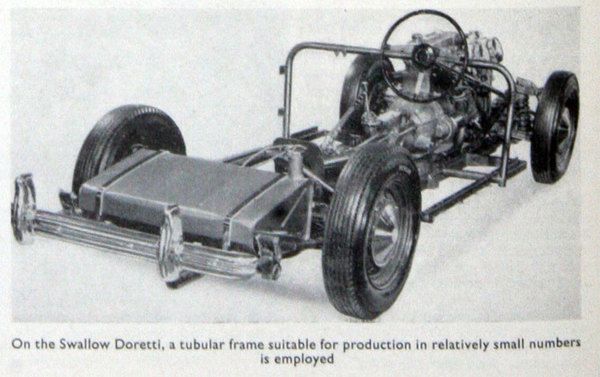 Swallow Doretti in On the Beach, Movie from 1959 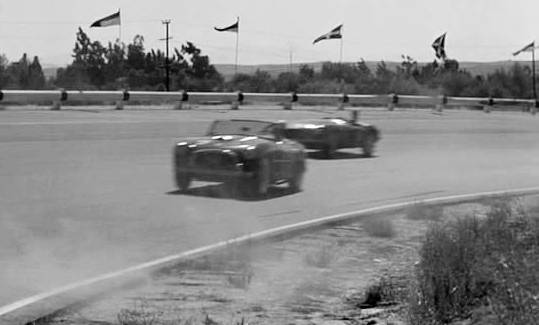