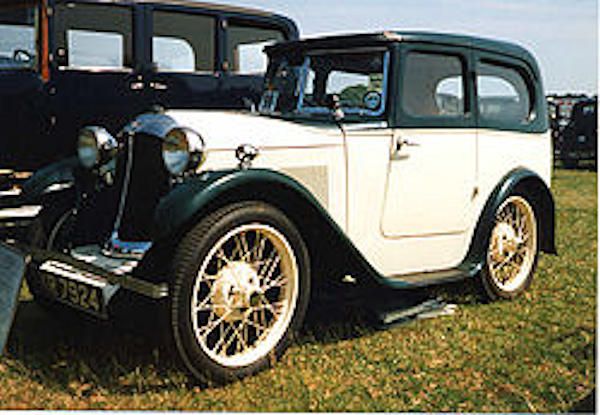 The Swallow Sidecar Company was founded on 4 September 1922 by two friends, William Walmsley  and William Lyons . Both families lived in the same street in Blackpool, England. Walmsley had previously been making sidecars and bolting them onto reconditioned motorcycles. Lyons had served his apprenticeship at Crossley Motors in Manchester before moving to Brown and Mallalieu as a junior salesman.

Lyons, having recognised the commercial potential for these sidecars, joined Walmsley and together they obtained premises in Blackpool with the assistance of a £1,000 overdraft. With a small team of employees they were able to begin commercial production of the motorcycle sidecars.

The company diversified in 1926, changing its name to the Swallow Sidecar and Coachbuilding Company and moved into the car coachwork business. The first car that Lyons and Walmsley worked on was the Austin 7, a popular and inexpensive vehicle. Lyons had persuaded a dealer in Bolton, Lancashire to supply him with an Austin 7 chassis and commissioned Cyril Holland, a coachbuilder from the Midlands, to create a distinctive, open tourer body. The result was the 1927 Austin Seven Swallow.

Priced at only £175, the Swallow, with its brightly coloured two-tone bodywork and a style that imitated the more expensive cars of the time, proved popular at a time of financial hardship for many. Soon after, a saloon version was produced: the Austin Seven Swallow Saloon.

In 1927 the "Sidecar" was dropped from the name, and it became the Swallow Coachbuilding Company.

The increasing demand for Swallows made it necessary to move the company closer to the heart of the British car industry and so, in 1928, they moved to a part disused First World War munitions factory at Holbrook Lane, Coventry. Business continued to grow and in 1929 the company was sufficiently confident to go to the expense of taking a stand at the London Motor Show.

Three new Swallow models appeared in 1929, based on Standard, Swift, and Fiat chassis. Also in 1929 John Black and William Lyons realised a long standing dream and produced a one of a kind sports car, This "First" SS (Standard Swallow) was a sleek Boat Tail Roadster with a flowing, streamlined design and pointed to an obvious attempt at making a fast car, possibly with the intention of venturing into racing. This car is believed to have been shipped to Australia in the late 40s.

Lyons wanted to move away from just being a coachbuilder and reliance on other manufacturers' existing chassis. He commissioned a custom chassis from the Standard Motor Company, fitted with either a 2 or 2.5 litre Standard engine. At the 1931 Motor Show he unveiled the S.S.1 coupé  a two-seater sports car with the designation SS 90 with six-cylinder engines of 16 and 20 HP.and a smaller 1 litre version, the S.S.II with 10 and 12 HP.

In 1933, the company took over the coachbuilder Holbrook Bodies at Holbrook Lane in Coventry for expansion  .

The continued success and expansion of the SS range resulted in the creation of the S.S. Cars Ltd motor company by Lyons in 1934. Walmsley, who did not share Lyons' ambitions, left the company at this time.

In October 1935 Lyons presented its first four-door sedan, for which the standard engine with the help of Harry Weslakes uspended valves (OHV) improved and thus gave over 100 hp. Again, there was a variant with a four-cylinder engine of well 1.5 liters capacity, which also had valves on the side. The six-cylinder high-performance engine was also used in the previous SS 1 Tourer and the sports car, which was now almost capable of 100 mph (160 km / h) and therefore was called. SS 100

These new SS models were compared to similar cars from Bentley or Alvis very cheap, so that "Jaguar" from the beginning had the reputation of a particularly inexpensive sports sedan. The top model was the end of 1937, the 3.5 liter with 125 bhp added, both in the sedan and in the sports car. At the same time a two-door convertible version with all three engine sizes was presented, the Drophead Coupé .

After the Second World War, due to the unfavourable connotations of the SS initials, the company was renamed Jaguar Cars Ltd in 1945. 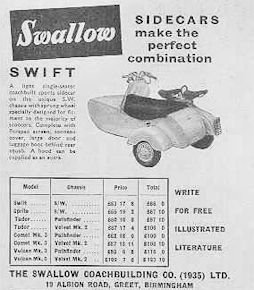 At the end of 1945, the Helliwell Group, an aircraft maintenance firm, bought the name and goodwill of the now defunct Swallow side car manufacturer, Swallow Coachbuilding Company (1935) Ltd, from SS Cars Limited. Sidecars produced at Helliwells' Walsall Airport works were built in the same way as the originals and used the same patented trademark.They closed shop in the early 1960s.

Swallow Coachbuilding Co. (1935) Ltd. has been registered in the UK by Peter Schömer & Michael A.R Burchett #07720862 for the purpose of building a new 3 wheel sportscar using the Harley Davidson Twincam EVO engine. It will be called the Swallow V-Twin and made in 2 models based on the Swallow Sidecars of 1935 Touring and Speedster. Both will be manufactured in Chichester, West Sussex, England.

The "SWALLOW" logo has been registered with the Intellectual Property Office in England as #2591789 by the Swallow Coachbuilding Co. (1935) Ltd.