The fifth-generation Alto (HA12/22) was introduced in October 1998. The styling was generally more rounded, the shape of the cabin showing the Alto's relationship with the new Suzuki Kei. The 658 cc K6A engine was now also available without a turbocharger, joining the turbocharged version and the familiar 657 cc F6A engines. The turbocharged Works models were available with a 60 hp F6A engine (i.e., 5MT/3AT and FF or 4WD) or a 64 hp VVT K6A (RS/Z, 5MT and FF or 4WD). The front-wheel-drive RS/Z was sold with a non-VVT K6A engine when in combination with a 4-speed automatic transmission, it too with a claimed 64 hp. In December 2000, the Works versions were discontinued, as the Alto was realigned as an economy version. The Suzuki Kei Sports picked up the Works' mantle. 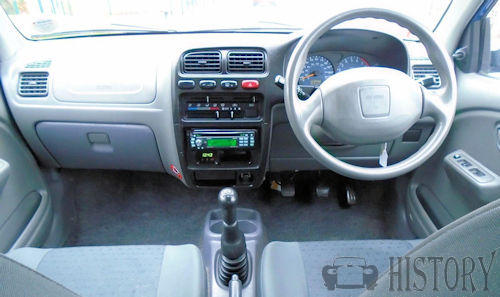 Several derivatives were produced from this generation. Suzuki produced two "classic-style" versions: the Alto C  with a deep chrome grille and a curious headlamp arrangement by which circular main lamps were joined with ovoid sidelights and indicators, which was shared with the Alto Works; and the Alto C2  which had separate headlamps and sidelights and a wider grille. Mazda also sold the standard Alto as the Carol, and Mitsuoka used the Carol as a basis for their Ray. Pakistani production began in 2000 utilizing an old carburetor based F10A engine.

The car was sold as a Chevrolet Alto in Colombia and Ecuador, equipped with a one-litre, sixteen-valve four-cylinder engine.

In December 2000, the fifth generation Alto received a thorough facelift, becoming the HA23. As the Works was discontinued, naturally aspirated versions of the K6A became the only ones on offer, with either 54 hp (40 kW) or 46 hp (34 kW) in an especially efficient lean-burn iteration. Front- or four-wheel-drive, manual and automatic transmissions were available (no more CVT), in either a 3- or 5-door hatchback body. A 3-door van version remained available. 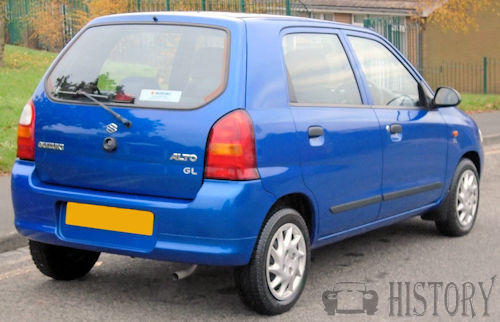