The third generation (CL/CM11) replaced the CA71 in September 1988. This was the last generation of Alto to have an associated Fronte model. It had strikingly angular styling, with an unusual glazed C-pillar on the 5-door. Another curiosity of this generation was the availability of a version with sliding doors, the "Slide Slim", intended to simplify entering and exiting in tight spaces. It also made egress easier for the old and the infirm. When the Fronte name was discontinued in October 1989, the passenger car versions (CN/CP11) became Altos. Initially the CL11 used the 12-valve 42 hp (31 kW) F5B engine known from the SS71 Cervo, but with an added 34 hp (25 kW) 6-valve version in lower-spec versions. A 46 hp (34 kW) DOHC version was also available in the Twin Cam Rl. Passenger car versions had the same engines, but all with 2 hp less due to more stringent emissions controls. The fuel-injected, 12-valve, turbocharged Works models came with an SOHC 58 hp (43 kW) engine (FF S/X or 4WD S/R) or a 64 hp (48 kW) DOHC version (FF RS/X or 4WD RS/R). The front-wheel-drive Works' were available with a 3-speed automatic in addition to the standard 5-speed manual. 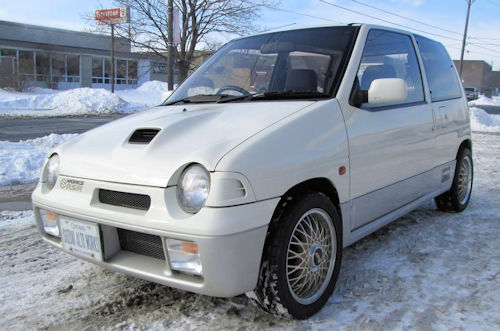 When the Kei car standards were changed in 1990, capacity was increased to 657 cc (F6A) in March, the Alto becoming the CL/CM/CN/CP21 in the process. The new standards also allowed for a 100 mm (3.9 in) longer car, which meant new bigger front and rear bumper, and new headlights and grille. Lower grade Van versions received a 6-valve 36 hp (27 kW) engine, while passenger car versions (and the l'Èpo Van) got a 12-valve, 52 hp (39 kW) version. 4WD versions with the 3-speed automatic transmission were fuel-injected and offered 3 more hp. The F6A-engined Works RS/X and RS/R still claimed the legally limited 64 hp, but the lower grade i.e. Turbo (introduced in July) received a 6-valve SOHC-engine producing 61 hp (45 kW) Reflecting decreased tax benefits for commercial Kei cars, the Works series was now classified as passenger vehicles, allowing for a real backseat. 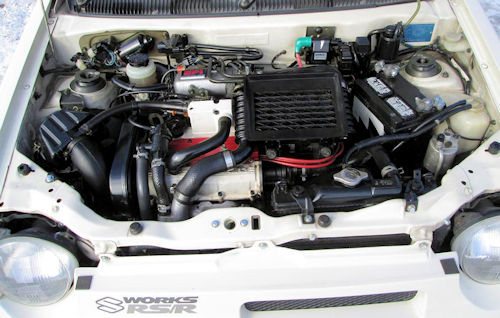 In September 1991, responding to increasing safety demands, the Alto received side impact protection. Also, the vertical door handles (see picture on the right) on three-door versions were replaced by traditional horizontal ones. The reengineering was extensive enough to necessitate new model codes, with vans becoming CL/CM22 (FF/4WD) and passenger versions (including the Works) now called CR/CS22. While performance engines remained as they were, the "cooking" Alto's engines were updated with power outputs up to 40 and 52 hp respectively (29/38 kW).

Suzuki also produced a version (the Hustle) with a high roof behind the front seats, which was unusual in that it used a modification of the five-door Alto's body rather than a completely new body; this made it possible to link the Hustle with the Alto, but made the styling rather unharmonious. Its appearance was similar to the Nissan AD Max van. It was short-lived, only being offered between November 1991 and October 1993. 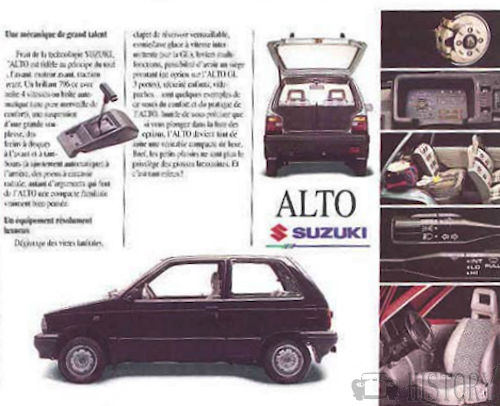