The second generation, introduced in Japan in September 1988, followed by their European debut at the Brussels Auto Salon in October.Some say it was designed at GM's Technical Center in Warren, Michigan, USA, and GM did designate it the GM M platform. (Personal interviews with GM Proving Grounds [Milford, Michigan, USA] Technicians indicate that the car was never seen at the Proving Grounds during the development period, thus casting doubt on a Warren design.) The chassis, engines, and drivetrains were developed by Suzuki, The second generation offered new styling and four wheel independent strut suspension. A turbocharged version remained fairly popular in Canada, which was the only export market for the version.

It was available with a 1.0 liter 3-cylinder with a power output of 53 hp (40 kW), a 1.3 liter 4-cylinder, and a 1.6 liter four-cylinder. The higher powered Cultus/Swift GTi had an improved G13B engine which featured hollow camshafts, stronger web casting on the engine block, a better flowing intake manifold (the prior generation intake manifold had its shape compromised to fit into the engine bay), and its ECU now had electronic control over ignition timing. It now put out 100 hp (75 kW) of power. The GTi also featured all wheel disc brakes.

Suzuki facelifted the Cultus in 1991 for the 1992 model year. The update involved the relocation of the rear license plate to the rear bumper from in between the tail lamps. The gap vacated by the license plate was filled in with either a black plastic panel or translucent red perspex panel integrating with the tail lamps. At the front, Suzuki revised the bumper's airdam, and inside, the interior was substantially re-designed.

All Swifts got a redesigned front and rear fascia as well as a new dashboard. GS sedans received power steering and new hub caps. The 1.0 litre 3-cylinder engine received a new cylinder head assembly: the engine of the previous generation used the same block and corresponding components but featured a head with valves in a V-formation straddling a single camshaft with rocker arms on shafts, whereas now the cylinder head assumed a much slimmer profile, owing to the valves now being in a vertical, inline configuration, actuated by inverted buckets also serving as hydraulic valve lash adjusters, all underneath a single overhead camshaft.

The first European-built model was a "Suzuki Swift" manufactured in September 1992 in Esztergom, Hungary. Updates in 1996 followed, and model year 2000 modifications included a version fitted with the same Suzuki four-wheel drive system that had been available in the Japanese market and badged as the Subaru Justy. The last modifications were made on the European Gen II from model year 2002 but only for the Hungarian market. The production of the three-door models ended in September 2002. In the same year, in December, the four-door sedan version was also discontinued. The last variation available was a five door version, which was offered until March 2003.

In Ecuador, the local plant Aymesa assembled some versions of this vehicle. The three-door version was called Suzuki Forsa II, while the four-door sedan version was badged Chevrolet Swift. Production of the sedan ended about 1996, while the hatchback version continued to being produced until 1999 or 2000 and it was badged as Chevrolet Forsa in latter years. It was imported to Colombia from 1991 til 2004, where it was called the Chevrolet Swift.

Generation two of the Cultus remains in production today in Pakistan only. In North America, a rebodied version of the second generation was sold as the Suzuki Swift/Chevrolet Metro/Geo Metro/Pontiac Firefly. Designed by General Motors, the design echoed that of the contemporary Chevrolet Cavalier and Pontiac Sunfire. In Japan, the Cultus was gradually replaced by the slightly larger Cultus Crescent, sold as the Baleno in Europe and as the Esteem in North America.

A Suzuki Swift of this generation was used as a weapon in the 2009 attack on the Dutch Royal Family.

Following 1985–1988 sales of the Forsa, the nameplate was changed to Suzuki Swift. The Swift was available as a three-door GTi and five-door GLX hatchback. A four-door sedan followed in 1990 — imported from Japan. For Swifts in North America, the 1.0 liter three-cylinder was only available in Canada where it was sold from 1992 to 1994. In 1990, the GLX was dropped; an inexpensive GA 3-door was added as were GA, GL and GS four-door sedan. At the same time, the GTi name was changed to GT because of an out-of-court settlement with Volkswagen of America over their similarly named GTI. The Swift nameplate moved on to separate from the Cultus, eventually being placed on the North American "third generation" model.

The second generation received a modest restyle and other production changes in 1992, including changes to the bumpers, tail lights and interior. GT/GTi versions were equipped with larger sway-bars, and the camshafts were now solid. Production for the North American market ended in 1994.

The second generation Cultus was sold as the Geo Metro in the US and Canada, and as the Pontiac Firefly in Canada (and the Middle East), and as the Chevrolet Sprint in Canada. Unlike the four-cylinder Swifts, General Motors-badged units usually featured the 1-litre G10 engine, with a turbocharged version and a larger 1.3 available in some Canadian market versions. In 1990, production began at CAMI Automotive, where all remaining Metro models with the exception of convertibles would be produced.

G13: 1.3 L I4 Canadian Metros had the 1.3 L engine available as an option beginning in 1993 in the three-door GSi model, and as standard equipment in the sedan (exclusive to the Canadian market at the time: American market Metros were not available in a sedan bodystyle until 1995). 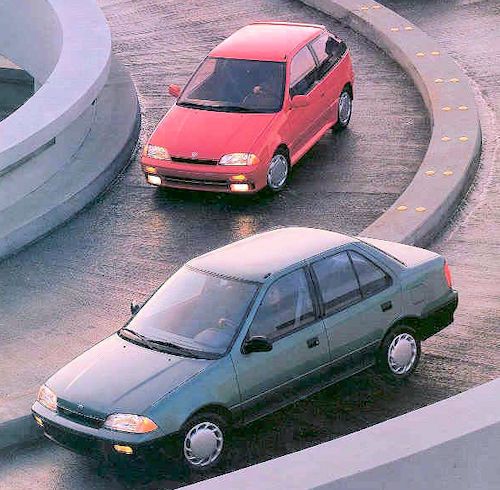 Only available as a hatchback (later also a convertible) in the United States, the Canadian market also received Japanese-built four-door sedans. Canadian sales of the Geo Metro only began in 1992, after the demise of the Asüna brand. For 1990, the Metro's second model year, Geo introduced the Metro LSi models, which included an automatic transmission, air conditioning and a stereo with cassette player. Geo also introduced the frugal XFi model, featuring a lower powered economy-tuned version of the three-cylinder engine, a higher final drive gear ratio, and certain deleted interior amenities (e.g., the passenger mirror). It thereby achieved 43 city, 51 highway per the revised 2007 EPA mileage standards. XFi made up less than 10% of Metro sales. A little bit later, the Japanese-buil convertible model debuted, available in LSi trim. In 1991, GM increased convertible production and added paint options. In 1992, the Metro received a facelift with new hubcaps, exterior modification and new interior controls.

In 1993 the convertible was discontinued. Automatic door locks, which deploy after the car reaches a speed of approximately 8 mph (13 km/h) were introduced this year. In 1994, five-door hatchback production ended. There was also a slight but barely noticeable change in the headlights. In 1994, Geo dropped the XFi model.

The Sprint badge continued to be used in the Canadian market until the Geo brand was introduced in 1992. Unlike its American counterparts, the Canadian Sprint remained available with the 1.0 liter turbo engine.

Introduced for 1989, the Firefly was also available as a convertible and as a four-door sedan from 1990 until 1991. All hatchbacks were manufactured at CAMI, while convertibles and sedans were sourced from Japanese production. The Firefly was not marketed for the 1992 and 1993 model years when the 1993-only "Asüna" brand introduced the larger 1992 LeMans to replace the Passport Optima and the pre-facelift Firefly.

In 1994, the Firefly returned with a facelift following the demise of the Asüna brand, available as a hatchback and a sedan. It was short-lived, being replaced by the third generation for the next year. 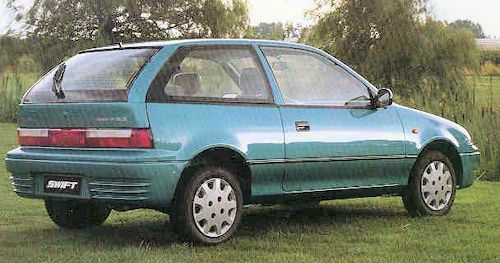