The Suzuki Cultus is a supermini first presented at the 25th Tokyo Motor Show, formally introduced to the Japanese domestic market in 1983 and ultimately manufactured in seven countries across three generations and marketed worldwide under more than a dozen nameplates — prominently as the Suzuki Swift, Geo Metro, and Holden Barina.

Offered across its lifespan in four body-style variations with engines from the Suzuki G engine family, the second generation Cultus still remains in production in Pakistan. The Cultus family of vehicles has been marketed in Asia, North America, South America, Australia, and Europe. While never formally marketed in New Zealand they were imported and sold on the secondary market. 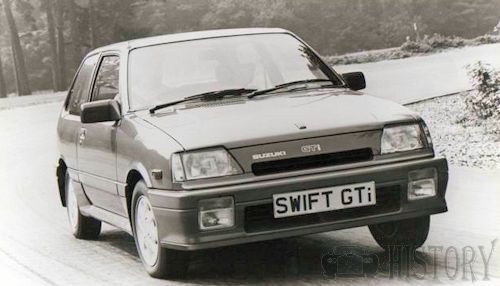 The name Cultus derives from the Latin cultus, meaning "care" or "adoration."

The first generation of the Cultus was designed and developed by Suzuki for the Japanese Domestic Market (JDM) and introduced as the 1983 SA310, the name shortly thereafter changed to Cultus. GM and Suzuki had formed an alliance in 1981, and so GM was able to market the Cultus as a captive import, introducing it to the North American market as the 1985 Chevrolet Sprint. Beginning in 1985, Cooper Motor Corporation (CMC) of Nairobi, Kenya, also assembled the SA310.

New Zealand assembly (as the Suzuki Swift but also sold as the Holden Barina) commenced in 1985.

Originally sold by Suzuki as the Suzuki Forsa, it was marketed in Ecuador, Chile, Canada and the USA (minimally) from 1985 to 1988 — with Suzuki offering the supermini with either a carbureted 1.0 L inline-3 cylinder or fuel injected 1.0 L inline 3 cylinder turbocharged engine. The car had much greater reach in North America as the Chevrolet Sprint and the Pontiac Firefly.

Suzuki did not initially market the Forsa on the US mainland, but rather only in Hawaii, Guam and the Northern Marianas. An undetermined number of Forsa models were imported to the U.S. mainland to test the commercial viability of a supermini in the US. As a record of US marketing of the Forsa, listings at the EPA Fuel Mileage Site carry the 1985 model as the Suzuki SA310 (the original JDM name for the Cultus, Forsa and Swift), no listing for 1986 — and both the Forsa and Forsa Turbo for 1987 and 1988. For North America, Suzuki changed the name from Forsa to Swift with the 1989 introduction of the second generation. 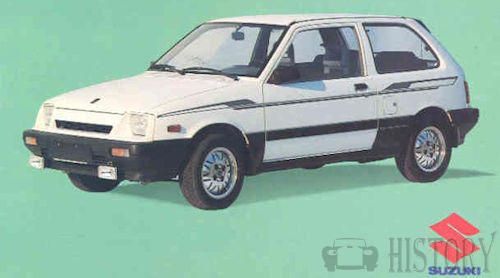 The Chevrolet Sprint was sold in the United States and Canada, with GM continuing to market the Chevette until 1987 alongside the Sprint. In the 1988 model year, the naturally aspirated hatchback was named the Chevrolet Sprint Metro.

The "Sprint" and "Sprint Metro" differed in their engines, though both were computer controlled carb systems. From 1985 to 1988, the carbureted 1.0 L 3-cylinder engine used a hemispherical head design. Later, fuel injection required the cylinder head for 1989 be redesigned to add the additional cooling required, reducing gas mileage.

The Sprint was originally offered in parts of the western US for the 1985 model year; subsequently Chevrolet marketed the Sprint across North America. All models were initially 3-dr hatchbacks. Starting in 1986, a five-door hatchback version was offered, called the Sprint Plus. That year, another model called the Sprint ER was offered that included a few extra features, such as an "upshift" light to indicate the ideal speed to shift to the next highest gear on manual transmission models. Although air conditioning was offered in all years, the three-speed automatic transmission wasn't offered until 1986. All models featured front-wheel drive and 12-inch tires.

Turbocharged versions of the 1.0 L 3-cylinder engine were available in the Turbo Sprint in both the United States and Canada. Colors were limited to red, white and blue for the Turbo Sprint. In the United States, the label was dropped with the introduction of the Geo Metro (second generation Cultus), but it continued to be used for a while longer in Canada.

Colombia The name "Chevette Sprint" was considered before calling the Colombia model (first generation) the "Chevrolet Sprint" — to distinguish it from the Opel knock down kits imported to Brazil. When presented on 7 October 1986, the Sprint caused a sensation.Slight modifications were made in 1987, including increasing the wheel sizes from 12" to 13" and the Sprint remained in production virtually unchanged til 2004 — with a total production of 70,848. 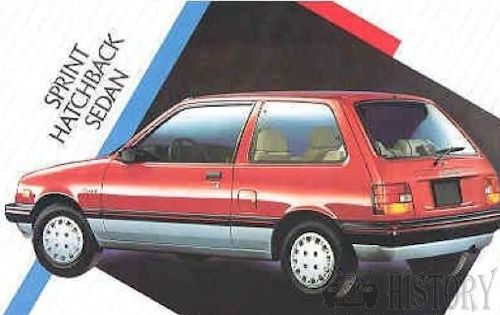