Externally and internally the Series IIIA was identical to the Series III. The improvements were directed solely at improving the durability of the car. To this end, engine capacity was increased to 1592 cc and a stiffer crankshaft fitted. To increase reliability, the crankshaft incorporated larger diameter connecting rod bearings which called for modifications to the connecting rods and gudgeon pins. Modified oil and water pumps completed the engine changes. As a result, power output increased from 78 bhp (58 kW) to 80.25 bhp (59.84 kW) at 5100 rpm and torque increased from 84 lb·ft (114 N·m) at 3500 rpm to 88.2 ft·lbf (119.6 N·m) at 3900 rpm.

In addition, the Series IIIA included many detail changes such as an increased diameter front anti-roll bar which greatly improved roadholding, a redesigned clutch bell housing, a revised clutch assembly with 9 pressure springs instead of 6 and a redesigned air cleaner assembly. Inside the car a fresh-air heater, hitherto available only at extra cost, became a standard fitting. All of these changes combined to make the Series IIIA subtly different from its predecessor and to give the Sunbeam Rapier a new lease of life in the showroom. 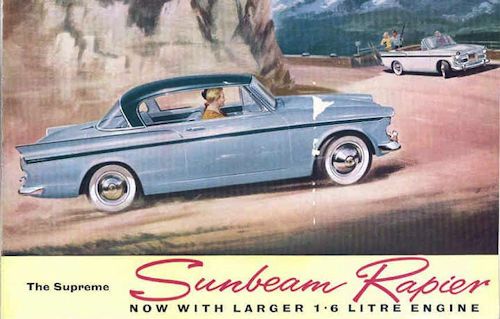