The Chrysler Sunbeam Lotus is a small sportssupermini 3-door hatchback manufactured by Chrysler Europe at the former Rootes Group factory in Linwood in Scotland and the Lotus facility in Hethel, Norfolk.

The Sunbeam Lotus was unveiled at the Geneva Motor Show in April 1979, but the road-going version of the rally car was not actually ready for deliveries to the public until after the rebranding, and thus became the Talbot Sunbeam Lotus. At first these were produced mostly in black and silver, although later models came in a moonstone blue and silver (or black) scheme.

The car was equipped with a 2.2 liter four-cylinder Lotus engine . Lotus had developed a cylinder head with 16 valves for the model. Together with a few other changes, the result was an output of 150 hp (110 kW). A special feature was a five-speed transmission from ZF , which was not available for any other Sunbeam model.

The production process was cumbersome. Basically, it was series production vehicles that were subsequently revised by Lotus. The starting model was a Sunbeam 1.6 GLS, which - apart from a tighter suspension - was equipped as standard. The vehicles were individually transferred to Lotus, where their own engine and five-speed gearbox were installed. The cars were then returned to Chrysler for the final touches.

The performance of the car was impressive. Acceleration from 0 to 96 km / h in 6.8 seconds, and an acceleration from 0 to 160 km / h was measured in just 19.8 seconds. The Talbot Sunbeam Lotus was successful in rallying. Talbot had a factory rally team in 1980 and 1981 that used several Sunbeam Lotus. Henri Toivonen , Guy Fréquelin and Stig Blomqvist won the 1981 World Rally Championship for Talbot. The car saw not only enthusiastic press reviews, but also much success in the World Rally Championship and in 1981 the Sunbeam Lotus brought the entire Manufacturer Championship to Talbot.

The Sunbeam Lotus was built on the Sunbeam 1.6 GLS, but with firmer suspension, a bigger anti-roll bar, and a bigger transmission tunnel. The drivetrain consisted of an enlarged 2172 cc version of the Lotus 1973 cc 907 engine, a 16V slant four engine (type 911, similar to Lotus 912), and a ZF gearbox, all of which were installed in the car at Ludham airfield near the Lotus facility in Hethel, Norfolk, where the nearly-complete cars were shipped from Linwood. The final inspection was held at Stoke, Coventry. The Lotus type 911 engine developed 150 horsepower (112 kW; 152 PS) at 5,750 rpm and 150 pound-feet (203 Nm) of torque at 4,500 rpm in road trim. In rallying trim this was increased to 250 bhp (186 kW; 253 PS). 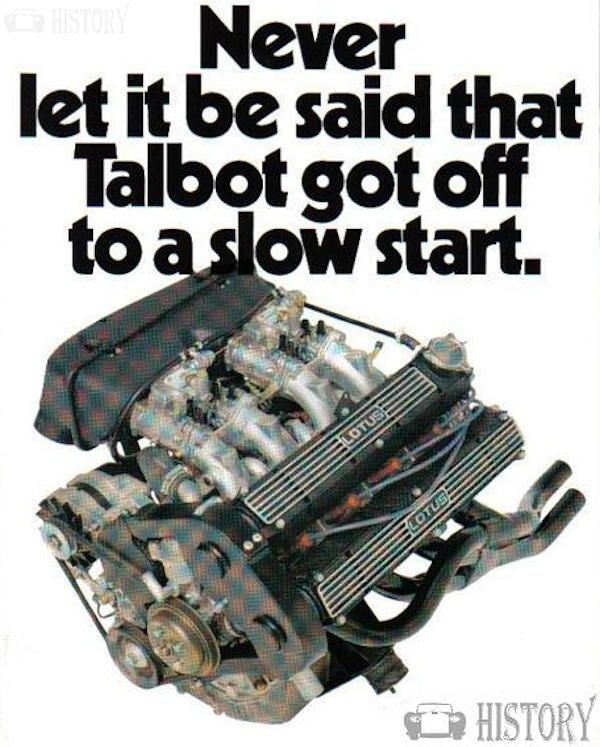