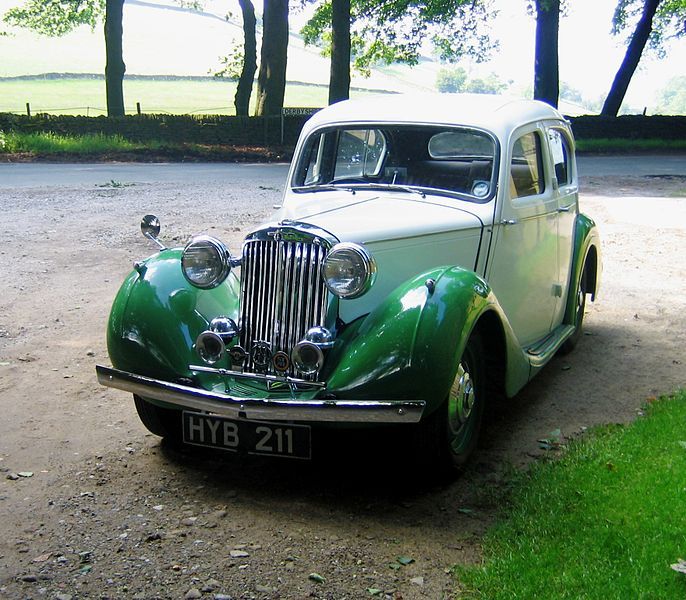 The Sunbeam Motorcar Company Ltd was formed in 1905 to separate the Sunbeam motorcycle and bicycle maker from the new car manufacturer.

Sunbeam merged with the French company Automobiles Darracq S.A. on August 13, 1920. In order to import Clément-Bayard cars into England, Darracq bought the London-based firm of Clement-Talbot to become Talbot-Darracq. The addition of Sunbeam created Sunbeam-Talbot-Darracq, or STD Motors, however during the height of the Great Depression in 1935 STD Motors went bankrupt.

In France the former Talbot plant was purchased by entrepreneur/engineer Antonio Lago who from 1935 produced luxury cars badges as Talbot-Lagos (though when these were imported into the UK they still turned up carrying the old Darracq name).

Talbots were still a success at this time and in 1935 both its UK assets and the Sunbeam business were purchased by the Rootes Group headed by brothers William 'Billy' and Reginald Rootes.

The existing British Talbots were re-badged as Sunbeam-Talbots from 1938 onwards and were a combination of current Hillman and Humber chassis and quality Talbot coachwork. Subsequent Talbots used a Talbot badge and grille rather than the traditional Sunbeam badge and grille.

An early proponent of badge engineering, Rootes built a single mass-produced chassis and equipped it with different body panels and interiors that fitted different markets. Ending production of existing models at all new companies, Rootes replaced them with designs from Hillman and Humber.

The first two models introduced were the Sunbeam–Talbot 10 and the 3-litre. The Ten was launched in August 1938, and was an upgrade from the previous Talbot Ten. It had a 1185 cc sidevalve Minx unit engine with an alloy head, and a chassis that had its origins in that used in the Hillman Aero Minx. The Ten was available with four-door saloon, sports tourer bodywork and drophead coupe.

The Sunbeam-Talbot 2 litre was introduced in 1939 and was based on the Ten, though it used the 1944 cc sidevalve engine from the Humber Hawk and Hillman 14. Due to the advent of World War II, these models were rare. They were available in the same bodyworks as the Ten.

A rebadged Talbot 3 Litre was the 3 Litre based on the Humber Snipe. It shared the same chassis and 3181 cc sidevalve six with an alloy head. It was available in the saloon, sports saloon, sports tourer and drophead coupé.

Another new model for 1939 was the 4 Litre that was based on the Humber Super Snipe. The 4 litre shared the same chassis as the 3 Litre and the Super Snipe. It came with a 4086 cc sidevalve six and alloy head. The 4 Litre was available in the saloon, sports saloon, touring saloon, sports tourer, drophead coupé and touring limousine.

These models continued to be listed after the war until 1948. However, materials were short at that time and it has been reported that "all the [3 and 4 litre] engines were needed for the big Humbers", so that Sunbeam Talbot production was in reality virtually or entirely restricted, post-1945, to the Minx based 10 and the 2-litre.

All Sunbeam-Talbot production was suspended during the war, after 1940, though Rootes continued to build the Hillman Minx and Humber Super Snipe for military use.

Rootes was responsible for providing Britain with 14% of its bombers, 5000 aero engines, 300,000 bombs and 60% of its armoured cars. For his efforts as chairman of the Supply Council, Ministry of Supply, William Rootes was recognised by a knighthood in the New Year Honours List of 1942. In 1945 when production again resumed, only the 10 and 2-litre were continued. The 3 and 4 litre models were never revived and production ceased.

The following year, production moved from the ex-Talbot London plant to the new Ryton plant, opened in 1940 under the UK government's shadow factory scheme, and initially used for the production of bombers and military vehicles. (Eventually the old London plant in Barlby Road, W10, was transformed into the set for the Thames Television programme The Bill, which was filmed there between 1987 and 1990.)

Rootes were relatively quick in reintroducing the 1,944 cc and 1,185 cc Sunbeam Talbots after the war, though the cars delivered during the first couple of years followed the designs first seen in 1939, readily identifyable from their separate headlamps.

The post-war Sunbeam-Talbot 80 and 90 designs were introduced during the summer of 1948. The cars were built at the new Ryton plant. Both came with a new streamlined design with flowing front wings into which were integrated headlamps in a manner reminiscent of the front of a fighter plane, a shape that would have been all too familiar to potential buyers at the time. The 80 used the Hillman Minx based ohv 1,185 cc engine, which was dwarfed by the size of the engine bay.The 80 was also fitted with an overhead valve version of the old 10 engine. The 90 had a modified version of the Humber Hawk ohv 4-cylinder 2-litre engine.

Both were available with saloon bodywork from British Light Steel Pressings or drophead coupe bodywork done by Thrupp & Maberly. The relatively slow Talbot 80 was discontinued in 1950.

Renamed as the 90 MK II, the 90 continued in production with a new chassis with independent front suspension. Completely redesigned, the headlamps were raised by three inches to meet American regulations. Replacing the front driving lamps with a pair of small air intake grilles the 90 MK II also had an increased OHV engine with 2267 cc.

Eventually renamed as the 90 MK IIA in 1952, the main update on this model was the deletion of the rear wheel spats.

Due to the confusion with the French Talbot concern, the 90 models dropped the Talbot part of the name with the 90 Mk III and became known as the Sunbeam MK III which was introduced in 1954. This model came with much larger front air intake grilles and three portholes just below each side of the bonnet. The engine now developed 80 bhp (60 kW; 81 PS), amazing compared to the 64 bhp (48 kW; 65 PS) that the Mk I 90 achieved. In 1957 production of the MK III ceased.

The 90 models proved to be a very effective rally vehicle surprising many people, with notable International successes by drivers Sir Stirling Moss and Sheila van Damm. 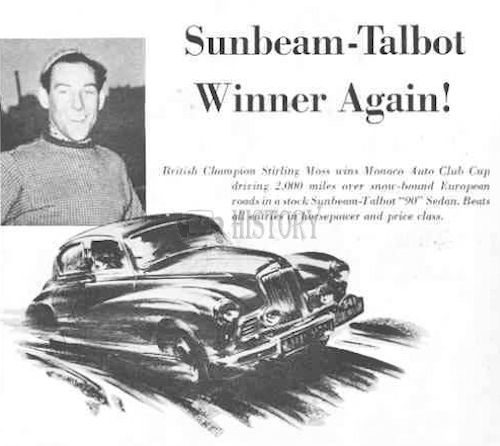 Appearing in 1953, one final Sunbeam sports model, the Sunbeam Alpine, was produced. Based on the Sunbeam Talbot 90 Mk IIa, this two-seater roadster was inspired by George Hartwell in Bournemouth, a friend of the Rootes family. The end product, however, was finalised by the Loewy Studio. The Alpine was named in honour of the success of the Sunbeam-Talbot team in the Alpine Rally. Dropped in 1954, the Sunbeam Alpine sports car ceased after nearly 3000 were produced.

Sunbeam models have both competed in and won numerous international rallies, most notably was the Monte Carlo Rally. Continuing in the tradition of STD, under Rootes Sunbeam-Talbots competed in various motorsports. They concentrated mainly on rallying rather than racing.